This is the 23 pages manual for Akai GXF 91 Service Manual.
Read or download the pdf for free. If you want to contribute, please mail your pdfs to info@audioservicemanuals.com. 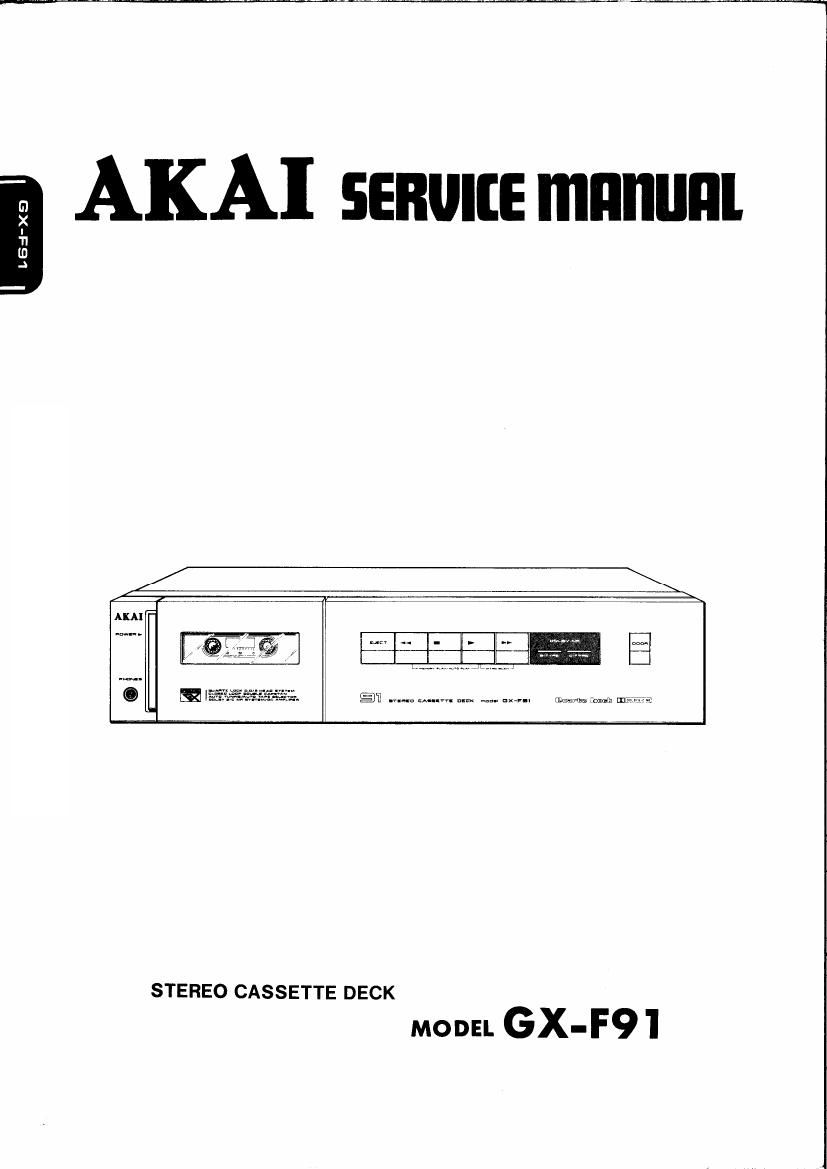 THIS MANUAL IS APPLICABLE TO BOTH SILVER

4 IRQ TEST ENABLE The STOP MODE signal is supplied from the MECH-CON. Normally
is at -úH" except that this is set to -úL-ù 3 seconds after the power is
turned on or when the STOP mode is established.

Accepts Auto Tuning only when set to -úL-ù.
Is at -úH-ù during the auto tuning, which, however, will be stopped if
-úL-ù input is encountered.

1) A 1 kHz signal is recorded and played back with
the data (011101) obtained in the coarse level
adjustment and the difference from the original
REF value (100000) is determined, which is then
added to the Ô¨Årst recording level data The result
is then used as the second recording level data

2) The same test is further repeated twice (Le, a
total of three tests are to be conducted.)

3) If after three tests the data obtained is outside
the specified range, two additional tests need to be
conducted.

4) [f the data is still out of the specified range after
the Ô¨Åfth recording/playback, an error is assumed.

5) If -úDolby ON" is detected, Alevel is reduced to
1/2, and Navel/2 is used as the amount oflevel
correction (a)

When the test key is depressed, the Mi-Com enters the
test mode with its pin ¬Æ set to -úH-ù. This activates
TR11 and TR12 on the meter drive PCB, which in
turns on TR4S and TR47 (on the Pre Amp PCB) via
D17 and D18, thereby causing the gates of TR44 and
TR46 to be at negative voltage. As a result, both
TAPE and SOURCE are shut off Thus, the test signal
is muted and therefore not made available at the
LlNE OUT during the test

0n the other hand, when pin ¬Æ of Mi-Com goes to
-úH", TRl of the Pre Amp is activated, causing the
Rec input (Line/DIN) to go to ground. In addition,
TRZ is turned on, deactivating TR3l As a result, the
test signal from TEST OSC is supplied to the Rec
Line Amp via R91