This is the 68 pages manual for Aiwa NS XV72 Owners Manual.
Read or download the pdf for free. If you want to contribute, please mail your pdfs to info@audioservicemanuals.com. 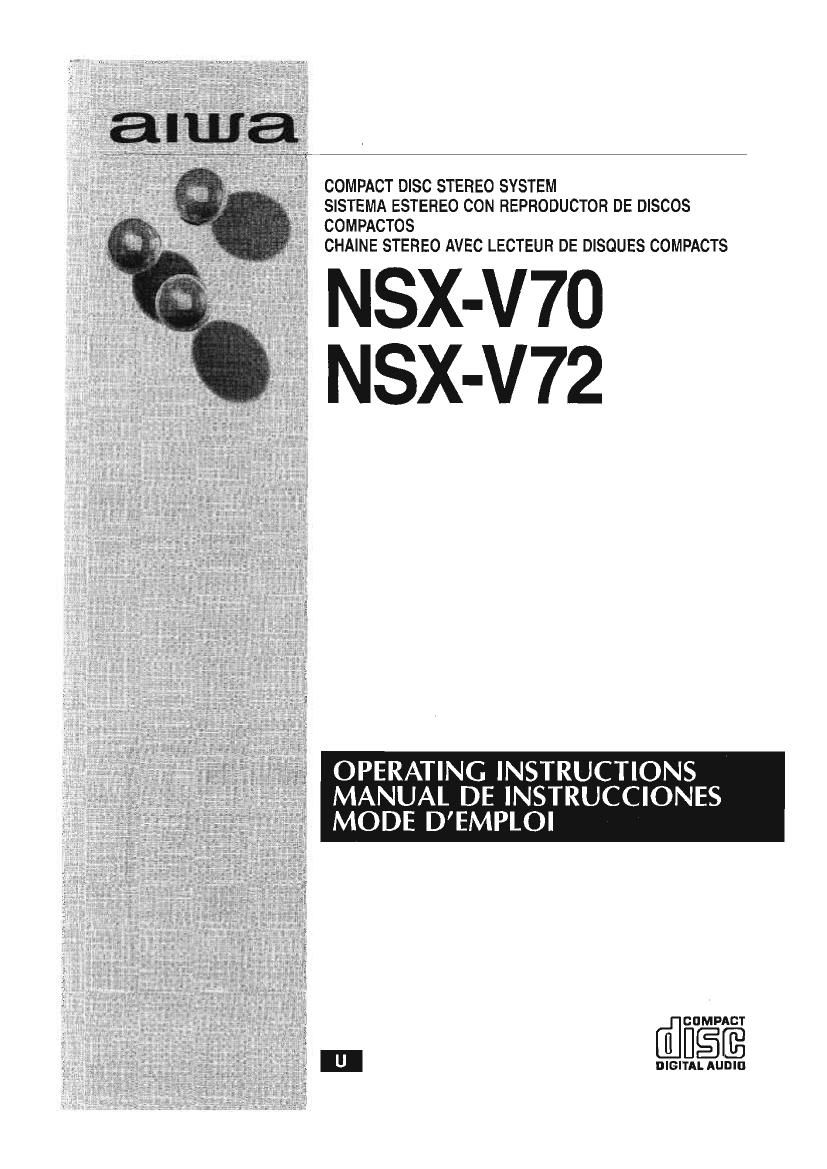 1 Press the TUNER/BAND button to select the band
repeatedly.
It the power is turned off, the previously tuned station will be
played (Direct Play Function).

2 Press the H4 DOWN or >>l UP button to select
a station.
Each time the button is pressed, the frequency changes.
When a station is received, “TUNE” is displayed for 2 seconds.
During FM stereo reception, "min is displayed,

To search for a station quickly (Auto Search)

starls searching for a station. After tuning in to a station, the

To stop the Auto Search manually, press the K4 DOWN or DH

- The Auto Search may not stop at stations with very weak
signals.

Press the MONO TUNER button to display “MONO" on the
display. —. ﬂ

Noise is reduced, although reception is monaural.

To restore stereo reception, press the button so that MONO
disappears.

To change the AM tuning interval

The default setting of the AM tuning interval is 10 kHz/step. ll
you use this unit in an area where the frequency allocation system
is 9 kHz/step, change the tuning interval as follows,

Press the POWER button while pressing the TUNER/BAND
button.

To reset the interval, repeat this procedure.

If there is a 4—second or longer blank between each track, the
search for the beginning of the current or next track during
playback can be easily made,

The search function uses a music sensor that may not be able
to detect tracks for tapes with:

- blanks of less than 4 seconds between tracks,

Alter playback on one deck finishes, the tape in the other deck
will start to play without interruption.

2 Press the TAPE/DECK1/2 button to select the
deck to be played back first.

4 Press the 4» button to start playback.
Playback continues until the l button is pressed.

0 To prevent accidental erasure, break oh the plastic tabs on
the cassette tape after recording with a screwdriver or other
pointed tool. —. ﬂ
@ Side Al® Tab tor side A
To record on the tape again, cover the tab openings with
cellophane tape, etc. (On Cr02 tapes, take care not to cover
the Or02 tape detection slot ©.)

-120-minute or longer tapes are extremely thin and easily
deformed or damaged. They are not recommended.

- Take up any slack in the tape with a pencil or Similar tool before
use. Slack tape may break or jam in the mechanism.
_.