This is the 80 pages manual for Aiwa NS X999 Owners Manual.
Read or download the pdf for free. If you want to contribute, please mail your pdfs to info@audioservicemanuals.com. 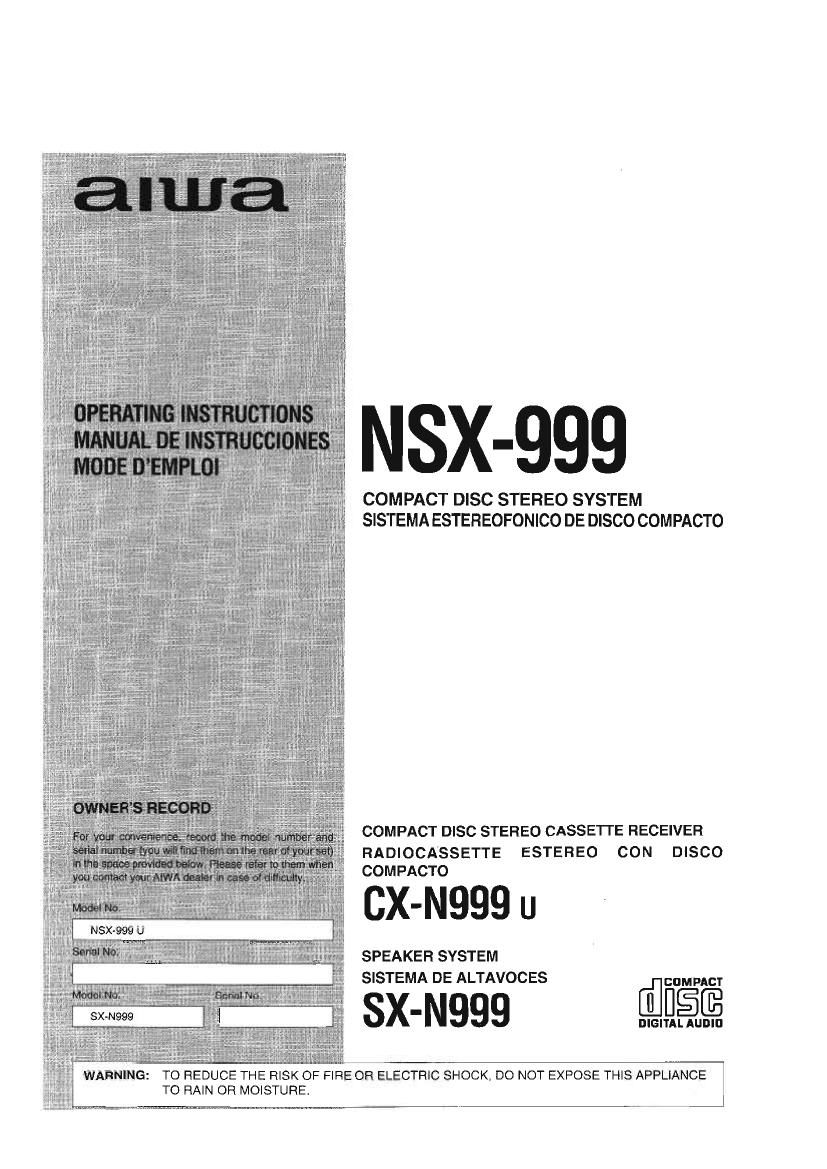 When you tlrst connect the AC cord, the display window demon»
strates the unit’s preset functions.

After a power interruption
The unit enters DEMO mode.

You can also turn the unit on by pressing one of the direct play
buttons. (See "DIRECT PLAY FUNCTIONS”)

The disc compartment may open and close for resetting the unit.

After use
Press the POWER button to turn off the power. The display
changes to clock or DEMO mode.

After turning on the unit

The flash window above the disc compartment lights up.

For 4 seconds, the most recently used function button flashes in
red. _

No operation may be carried out during this 4-secorid period,

The flash window shows the power is on. it tlashes when the disc
compartment is opened orclosed, and when the trays are rotated,
To turn it off, press the CD button while pressing the I CLEAR
button.

To turn it back on. repeat the procedure.

- Do not carry out this operation during recording.

Illumination guide -t E
Whenever one of the function buttons is pressed, the buttons for
that operation light up or flash.
Example:
When connecting the AC cord, the II SET button flashes to guide
you in setting the current time.

Connect headphones to the PHONES jack with a stereo standard
plug (063 mm/‘/4 inch).

No sound is heard from the speakers while headphones are
plugged in.

The current time needs to be reset. (See page 20.)

- If power is interrupted for more than about 24 hours, you will also
have to reset preset stations and timer playback or recording
settings. '

You can selectany track on any disc directly and begin play, —t n

Allthetracks on the selected disc oron all discs in the compartment
can be played randomly.

Press the RANDOM button on the remote control to display
RANDOM, before or during play. —~ E]

To cancel random play
Press the RANDOM button so that RANDOM in the display goes
out.

- Even if the « button is pressed, the previously played track
cannot be skipped.

- You cannot select tracks directly with the numeric buttons in
random play mode.

All the tracks on the selected disc or on all discs in the compartment
can be played repeatedly.

Press the REPEAT button on the remote control to display (I,
belore or during play. —v

To cancel repeat play
Press the REPEAT button so that C: in the display goes out.

RECORDING FROM A CD

Preparation
- Wind up to the point where recording will start.
- Use normal (type I) or CrOz (type II) tapes.

1 Insert the tape to be recorded on into deck 2.

Press the EJECT : mark to open the cassette holder.
Insert the tape with the side to be recorded on lirst facing you
and the exposed side down.

To record with DOLBY NR: Press the DOLBY NR button toturn
on the Dolby NR. The DCI NR indicator will light.

To record without DOLBY NR: Press the DOLBY NR button to
turn off the Dolby NR. The DCI NR indicator will go off.

Each time the REV MODE button is pressed, the reverse mode
changes.

To record on one side only, turn on I.

To record on both sides, turn on I).

5 Load discs onto the disc trays.
The disc loaded on tray 1 is played ﬁrst.

To stop recording from the CD
Press the I button to stop the deck, and press it again to stop the
CD player.

After play stops at the end of the CD
Deck 2 enters recording stop mode.

To record part of the CD