This is the 28 pages manual for Aiwa CA DW235 Owners Manual.
Read or download the pdf for free. If you want to contribute, please mail your pdfs to info@audioservicemanuals.com. 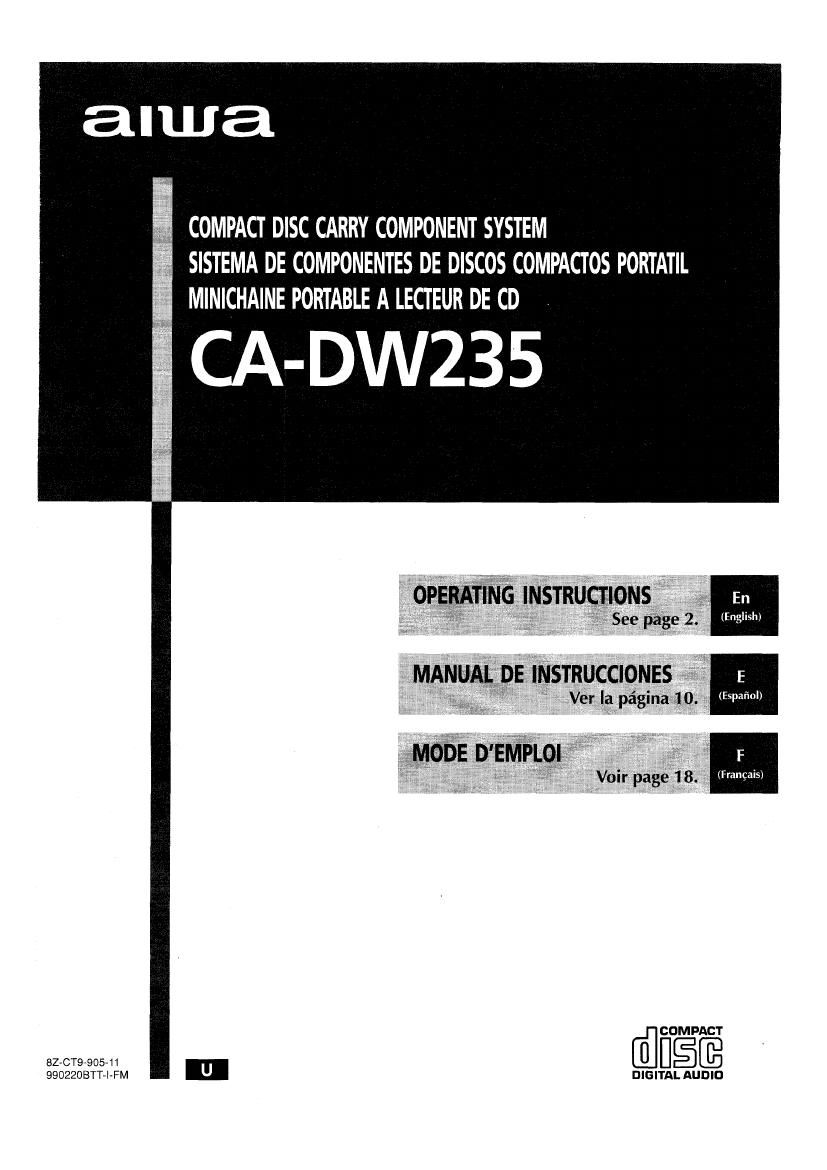 1 Press CD.
The power is turned on and the CD button lights up.
2 Press PUSH OPEN to open the disc
compartment. Place a disc with the printed
side up and close the disc compartment.

Total number of tracks and total playing time are
displayed

3 Press >/ll PLAY/PAUSE to start play.
The number of the track being played and elapsed
playing time are displayed.

I44.>>| SKIP/SEARCH - Searches for a particular point
during playback, Keep I44 or >>I pressed and then
release it.

- Skips to the beginning of a track. Press I44 or >>I
repeatedly.

REPEAT/FM MODE/08C
- Repeats a single track or all tracks. Select as follows.
C 1: A single track is played repeatedly.

Select a track with I44 or >>l.
(I: All tracks are played repeatedly.

To start play when the power is off, press CD. The
power is turned on and play of the loaded disc begins
(Direct Play Function).

If you load a disc while the CD button flashes in step 2,
play starts without pressing >/II.

After listening, press POWER/d) STANDBY to turn the
power otl.

- Do not use irregular shape CDs (example: heart-shaped,
octagonal ones).
It may result in malfunctions.

- Do not place more than one disc in the disc
compartment.

0 Do not try to open the disc compartment during play.

- Do not touch the lens. Doing so may cause malfunctions.

Up to 30 tracks can be programmed from the disc.

1 In stop mode, keep I STOP/MEMORY pressed
untll "M-Ø flashes In the display.

To check the program. press I44 or >>I in stop mode.
To clear the program, press I once In stop mode so that
-£M" disappears in the display.

To change the programmed tracks, clear the program and
repeat all the steps again.