This is the 19 pages manual for Adcom GTP 600 Owners Manual.
Read or download the pdf below. If you want to contribute, please mail your pdfs to info@audioservicemanuals.com. 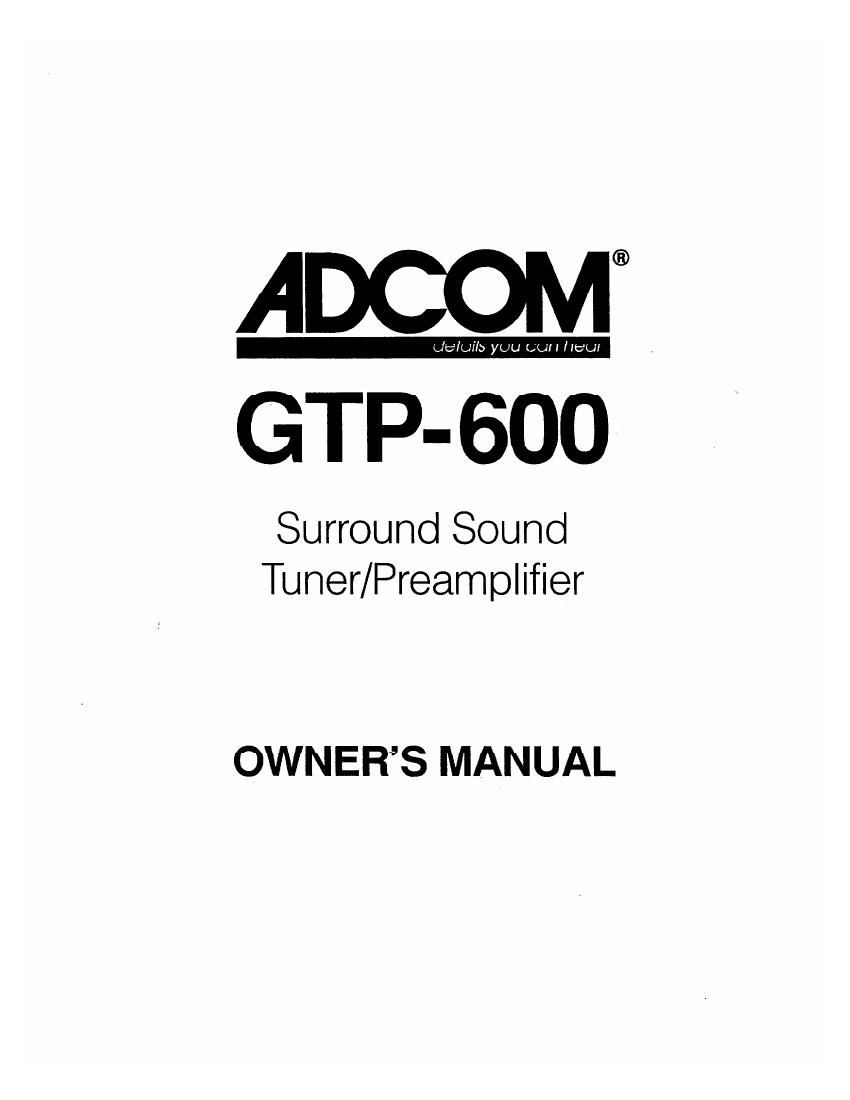 D) The test tone will shift to the rear speakers I lse the “Rear Level Up” and “Rear Level Down" buttons 6 to
adjust rear channel output to match that of the front left. center, and front right speakers.

You‘ll probably need to let the Balance Check test tones cycle through all speakers three or four times until you've
matched levels closely. Don't worry about how fast you can accomplish this balance adjusllnent — just take your
time and do it carefully.

NOTE: DO NOT PLAY ANY OTHER SOURCE THROUGH THE GTP-GOO WHEN USING THE BALANCE CHECK
CiFtCUI‘r it you I teed to check balances when playing a source. srmply put the source on "Pause." go through the
balance check routine. then resume playing the source

The GTP-6OO is an enormously flexible unit. This section is the most subjective in the entire Owner's Manual: Feel
free to take the suggestions here as starting points for your own experimentation. Above all. enjoy!

A) Choosrng the proper operating mode;

The GTP-6OO provides seven operating modes selected by the “Surround" button on the front panel 3 or the
remote controller t3. These are: Cinema. Dolby Pm logic. Stadium. Concert Hall, Nightclub. 5 channel
stereo, and Bypass (2 channel stereo.) Each of the first six modes is indicated by a front panel LED. (The
Cinema mode displays two LEDs — one to the left of “Cinema" and the second to the left of “Dolby Pro
Logic") in Bypass. or 2 channel stereo. no Mode LED lights.

A shelving filter with a corner frequency of 7 kHz reduces the often excessive high frequencies that make
some video soundtracks fatiguing to listen to. In addition. Cinema mode adds diminishing multiple delays
through the rear speakers to diffuse the surround information even further ll tan is possible through Dolby
Pro Logic.

2) DOLBY PRO LOGIC is one of the two preferred modes for properly processing Dolby Surround“ encoded
video soundtracks. a growing number of CDs. and even the audio portion of some computer gamestr in

this mode. the GTP-GOO presents a spatially correct soundstage with precise lateral imaging and front to
back depll 1.

3) STADIUM is used for non—Dolby Surround encoded material and recreates a large and acoustically
reverberant environment well suited for video sporting events and playback of music that is usually
performed in large outdoor arenas. A slight upper midrange frequency emphasis is added to the front