This is the 24 pages manual for Adcom GSA 700 Owners Manual.
Read or download the pdf below. If you want to contribute, please mail your pdfs to info@audioservicemanuals.com. 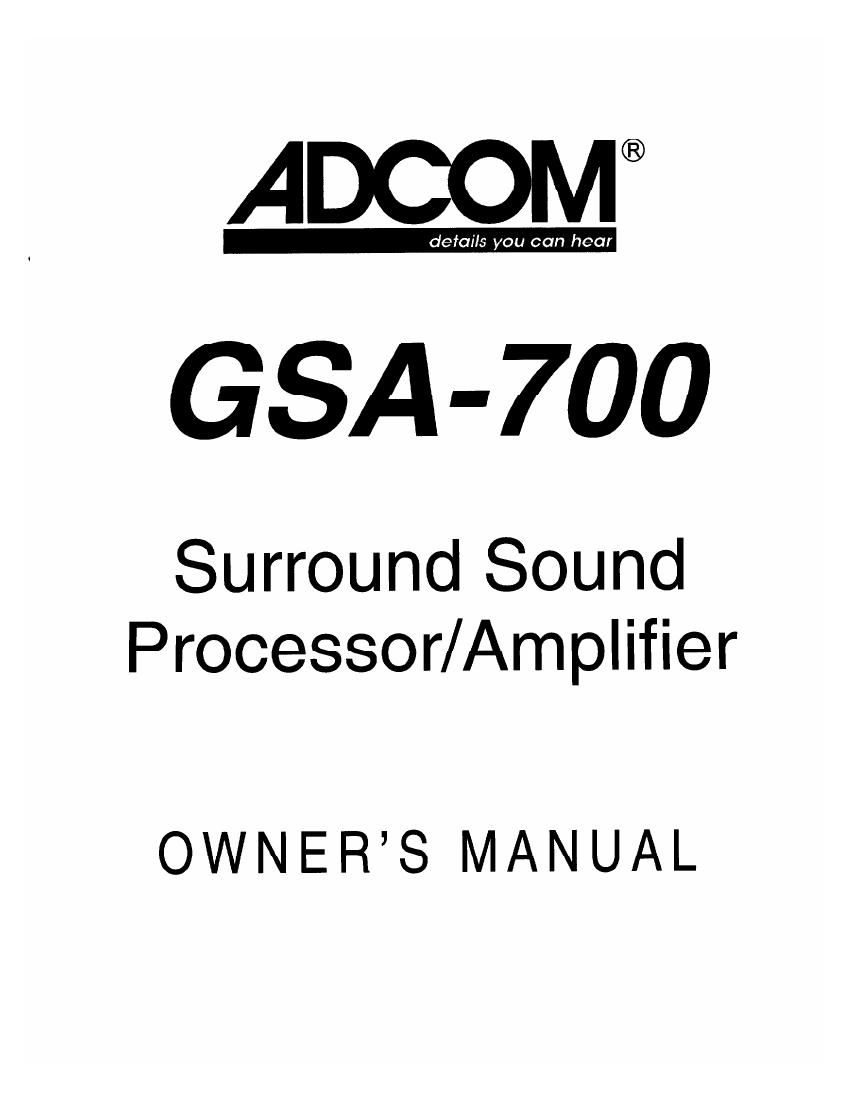 On Screen display for most-used iniormation

Congratulations on your purchase of the GSA-700 Surround Ampliﬁer/Processor. You have made a wise
choice that will bring you years of entertainment.

The GSA-700 is a unique addition to the Home Theater industry, being a 3-channel, high-current. quality
amplifier system combined with a Dolby Pro Logic Processor and including a port to incorporate an Adcom Dolby
Digital© Surround Processor (the GDD—l). The GSA-700 is designed to be added to an existing 2-channel audio
system to convert it into a 5-channel AudioNideo Home Theater Surround System with the convenience of On Screen
display and full—function remote control.

5-Channel Stereo: This mode makes full use of the home theater's speaker compliment without adding any
processing or delay. This is the only mode where the rear speakers operate in stereo (as opposed to mono). The
center channel speaker will produce a mono (L+Ft) signal, while the left-rear speaker will reproduce the left signal and
the right-rear speaker will reproduce the right signal. By adjusting the center and rear volumes. you can create a
dynamic and complete soundtield without the slight blurring effect of a delay line. There is no delay time to choose in
this mode.

2-Channel Stereo: This is also considered “Bypass" mode. The center and rear speakers are turned off, and
the signal is passed through the GSA-700 with no alteration. There is no delay time to choose in this mode.

In addition to adding a sense of spaciousness and ambiance, rear channel time delay serves a specific
purpose in Dolby Pro Logic playback. It prevents us from hearing front channel information, particularly dialog, from the
rear speakers. Based on a psychoacoustical effect called “masking", this technique presenres the proper directional
clues intended by the source’s producer.

Longer delay periods defeat the “masking" effect and create awareness of a growing discontinuity between the
front and rear outputs. Eventually, the rear channel output becomes a discrete echo rather than an integral part of a
coherent soundfield. For this reason, Dolby Pro Logic intentionally limits rear channel time delay to relatively small
amounts.

In the Dolby Pro Logic mode, it is important to match the volume settings on all the speakers so that they are
as close as possible. This measurement is usually done with your ears and is an accepted practice, however some
people prefer to use a hand held SPL (sound pressure level) meter for matching levels.

To use the System Balance Check, you must be in Dolby Pro Logic mode and it is recommended that no
source be playing at the time. If you are not in Dolby Pro Logic mode when you run through the Balance Check, the
GSA-700 will automatically revert to Pro Logic mode when the Balanced Check is done. The optimum manner to set
the volume level Is to utilize the remote control and sit in the pnmary listenlng posmon. Press the Bal Qhk button (0) on
the remote. You will notice a “waterfall" type sound emanating from the front-left speaker. It will last until you press the
button again, then it will move to the center speaker. Successively pressing of the button will advance the waterfall
noise to the fronteright speaker, then the two rear speakers at the same time. After the rear speakers, pressing the
button again will deactivate the noise. By listening to the relative loudness of each speaker. you may adjust the
independent volumes for the center and the rear speakers relative to the front left and right speakers, by using the Rear
Volume Up/Down (e) and Center Volume Up/Down (0) on the remote control. When you adjust the center or rear
volume, the corresponding Smaker Location LEDs (0) on the front panel will blink slowly many times to indicate the
change. If you have reached the upper or lower limits of the volume range, the LED(s) will blink 3 times rapidly.

If you have to turn the center or rear channels up to full-on and they aren’t loud enough, you will need to reduce
the preamp's volume as stated in “Setting the Volumes" on page 17. Similarly, if the center or rears are too
overpowering, try bringing the preamp’s volume up. Ideally, similar volumes should be achieved while the center and
rear indicators on the On Screen display are in (or near) the middle of the bar-graph. Repeat the process of setting the
levels until the ideal balance is achieved. Once the system is balanced, it is suggested to mark the preamp's volume
level so that it can be easily accessed again at anytime.

When the GSA-700 is properly configured and wired to your video monitor (TV), you have the ability to set
relative levels and check all the functions of the unit by utilizing the On Screen display function. This gives you a
complete visual indication of the status of the GSA-700.