This is the 17 pages manual for Adcom GFA 555 II Service Manual.
Read or download the pdf for free. If you want to contribute, please mail your pdfs to info@audioservicemanuals.com. 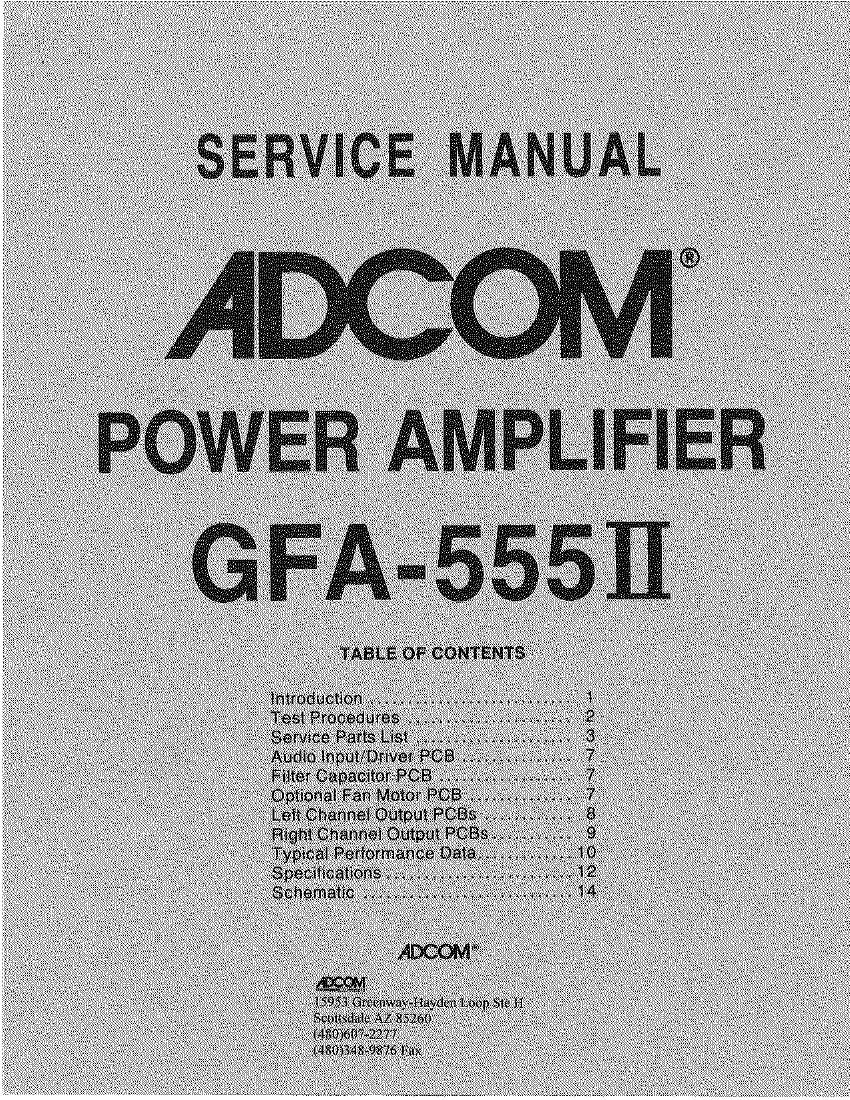 This service manual is intended to assist trained and qualified technical personnel in verifying the performance 01.
adjusting. and repairing the ADCOM GFA-SSSII power amplifier. The procedures described here are not intended for
persons unfamiliar with the appropriate safety and test procedures.

THERE ARE POTENTIALLY LETHAL VOLTAGES WITHIN THE GFA-555ﬂ AMPLIFIER WHICH WILL BE
ACCESSIBLE ONCE ITS TOP COVER IS REMOVED. DO NOT ATTEMPT FAMILIARIZATION. INSPECTION
OR ANY PROCEDURE WNATSOEVER UNLESS YOU HAVE DISCONNECTED THE DEA-555]] FROM THE
WALL AC OUTLET OR OTHER SOURCE CF AC POWER AND THE POWER-SUPPLY CAPACITORS ARE
COMPLETELY DISCHARGED. PLEASE TAKE NOTE THAT THE POWER-SUPPLY CAPACITORS TAKE AS
LONG AS 5 MINUTES TO DISCHARGE. THESE INSTRUCTIONS ARE PROVIDED FOR USE ONLY BY
COMPETENT TECHNICAL PERSONNEL. DO NOT UNDERTAKE ANY SERVICE PROCEDURES IN THE
GFA-555I] UNLESS YOU ARE TECHNICALLY QUALIFIED TO DO SO.

The ADCOM GPA-5550 is a stereo power amplifier rated at less than 0.04% THD from 20Hz to 20kHz with 200 watts into 8
ohms and 325 watts into 4 ohms. The output stage is capable of greater than 60 amps into low impedance loads. The
amplilier employs a discrete differential Class-A front. end followed by a Class-A voltage gain stage which amplify the
input signal to the voltage required at the output 01 the ampliﬁer. This high-voltage signal drives the high-current
triple-Darlington-lollower output stage which ampliﬁes the current by a lactor of about 50.000.

Referring to the accompanying schematic. describing the Left Channel only. the input signal passes through network
0101, 0102 and R103 which provide a 3dB bandwidth o1 1.7m to 500kHz to the input of the ampiiﬁer. 0101 is an
extremely high quality capacitor and serves to protect the ampliﬁer and the speakers connected to it from DC fautts atthe
output of the preamplifier. WE DO NOT RECOMMEND THAT 0101 BE SHORTED OUT. 0101 and 0102 form the
differential input stage.

Feedback is provided from the output to the base of 0102 by the network R123, R124 and C106. C106 provides a
high-frequency rolloolt above 200kHz, improving stability by taking high-frequency feedback before the triple Darlington.

Any DC imbalance in the ampliﬁer iconnected by R125,R126.R127,0107,C1thnd|C101.Any DC error atthe ampliﬁer
output is servoed back through lC101 to adjust the be current through the inputtransistors. DC bias is nominally 1 .0rriA
through 0101 and 0102. lC101 provides the DC bias current to 0101 and can swing from ground to +10V to bring the
amplifier into balance.

The bias network of R1 17 through R1 19 and 0307 form a tem perature-com pensated DC-bias voltage to the input of the
triple-Darlinglon-follower output stage. Mid» and high-frequency bypassing is provided by C104.

8901 and 0901 provide a load lor the amplifier at high frequencies. stabilizing the amplifier under varying load
conditions. 0201 and D301 provide a high-current return to the power supply for backlash current lrorn the load.