This is the 28 pages manual for Acoustat Monitor 3 Service Manual.
Read or download the pdf for free. If you want to contribute, please mail your pdfs to info@audioservicemanuals.com. 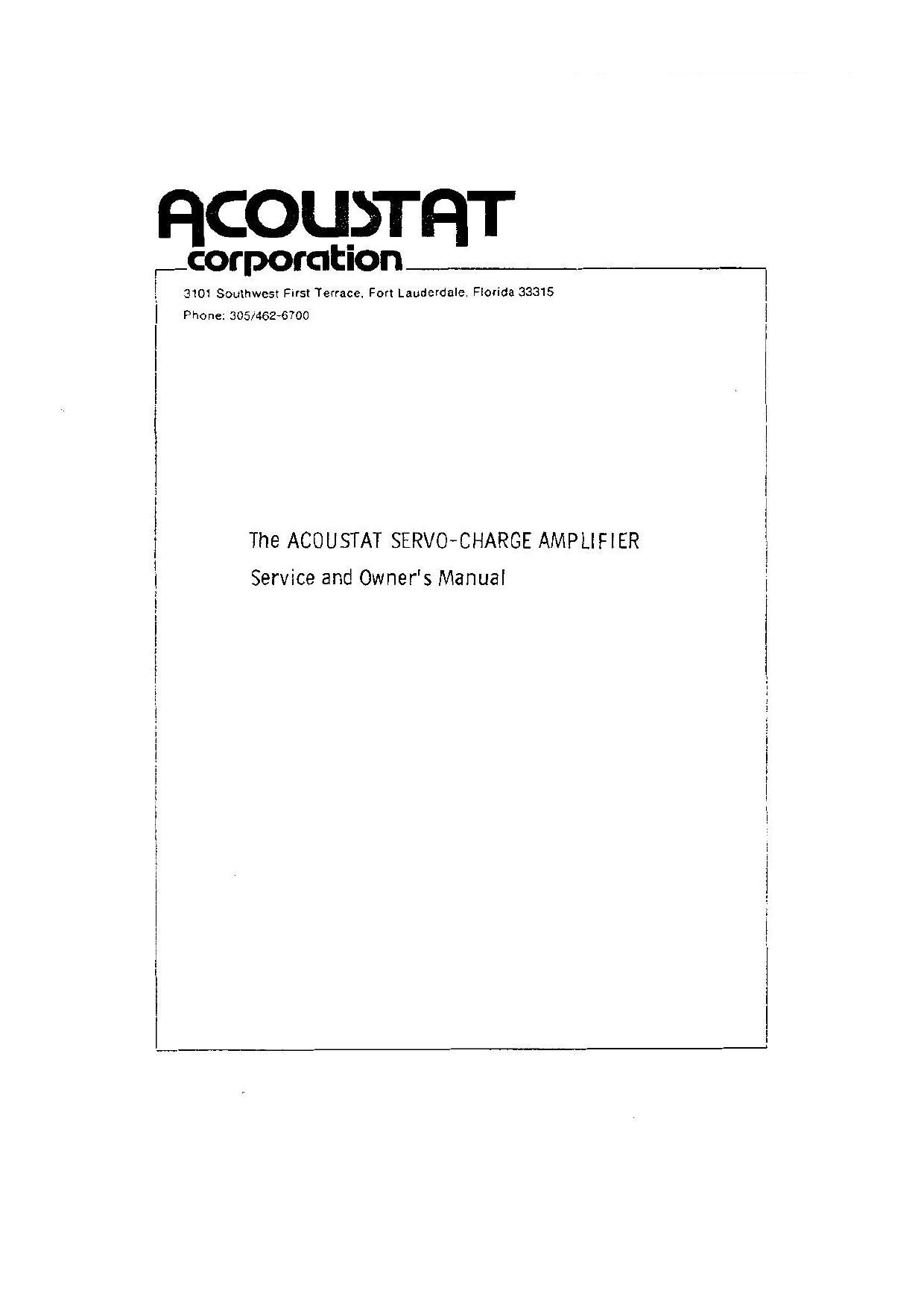 This is the first stage of the Servo-Charge amplifier and is in operation in both
the operating and standby modes of the amplifier. This stage amplifies and
processes the signal from the preamplifier other audio source and drives the
phase inverter and inephase (roar plates of the speaker) high voltage amplifier.

The Input and Equalization Amplifier provides approximately 20 dB of gain
at typical settings of the Gain control and includes the equalization networks
and the HF Balance control.

R5 acts as the input termination and sets the input impedance of the amplifier.

R9, R10, C12, and Gill comprise the "wall effect" equalization network to
smooth the base response of the dipole output of the speakers in the presence
of an acoustically reflective rear wall. If the speakers are to be operated

a considerable distance from a wall, or in "free air", this network can be
effectively bypassed by the addition of V2 megahm resistor in parallel with
C12.

Rl2, R13, and RM comprise the overall gain control network and C15 acts to
limit the DC offset of the stage by reducing the DC gain to unity.

In addition, on amplifiers prior to serial number l700, a higher level input

was provided which was designed to be driven by the speaker outputs of any
tuner/amplifier on which a preamplifier was not provided. This provision

was seldom utilized and was eliminated in the process of changing the main
input provision From a DIN (RCA phone) jack to a V4 inch diameter telephone
lack . This is a two conductor (mono) iock with only tip and sleeve connections.

If required in individual cases, the "receiver input" provision may be sub-
stituted tor the preamplifier input on the later amplifiers by moving the tip
connector lead from the telephone iack to the printed circuit board so that the
input to the amplifier is the iuncticn of R6, R7, and RB rather than the junction
of R5, R9, and Cl2--after installing R6, R7, R8, and CH on the printed
circuit board (R6 is substituted for the factory installed wire iumper in this
procedure).

Unit shuts down
to standby, but
comes back on
immediately .

Unit will not
turn on from

circuit can cause this problem.
The OP-ll device was found

to be particularly prone to this
rare problem. An arcing tube
can also affect proper operation
of the turn on circuitry.

The attending tube will

usually arc at the shutdown

to standby point and bring
back the amplifier to the

full 0n condition. This tube
can sometimes be spotted in a
darkened room. The simplest

standby. bad Relay solution is to replace all
four tubes.

White noise in Leaky 2N3440 Be sure the noise isn‘t

background below (Ql,Q3) originating Upline in the

preamp or elsewhere by removing
the input to the servo charge
amplifier. It noise persists

in volume, about
50%, accompanied
by low level hum.

Unit turns on from standby

due to AC line surges-

sometimes induced by an
air conditioner,ilourescent

Earlier production amplifiers
are sometimes found to do this.
Eliminate the problem by
installing a 680 ohm resistor

in series with the cathode
(banded end) of CRI4. This
resistor is factory installed
_-eginning with s/n I700.