This is the 6 pages manual for Accuphase P 266 Brochure.
Read or download the pdf for free. If you want to contribute, please mail your pdfs to info@audioservicemanuals.com. 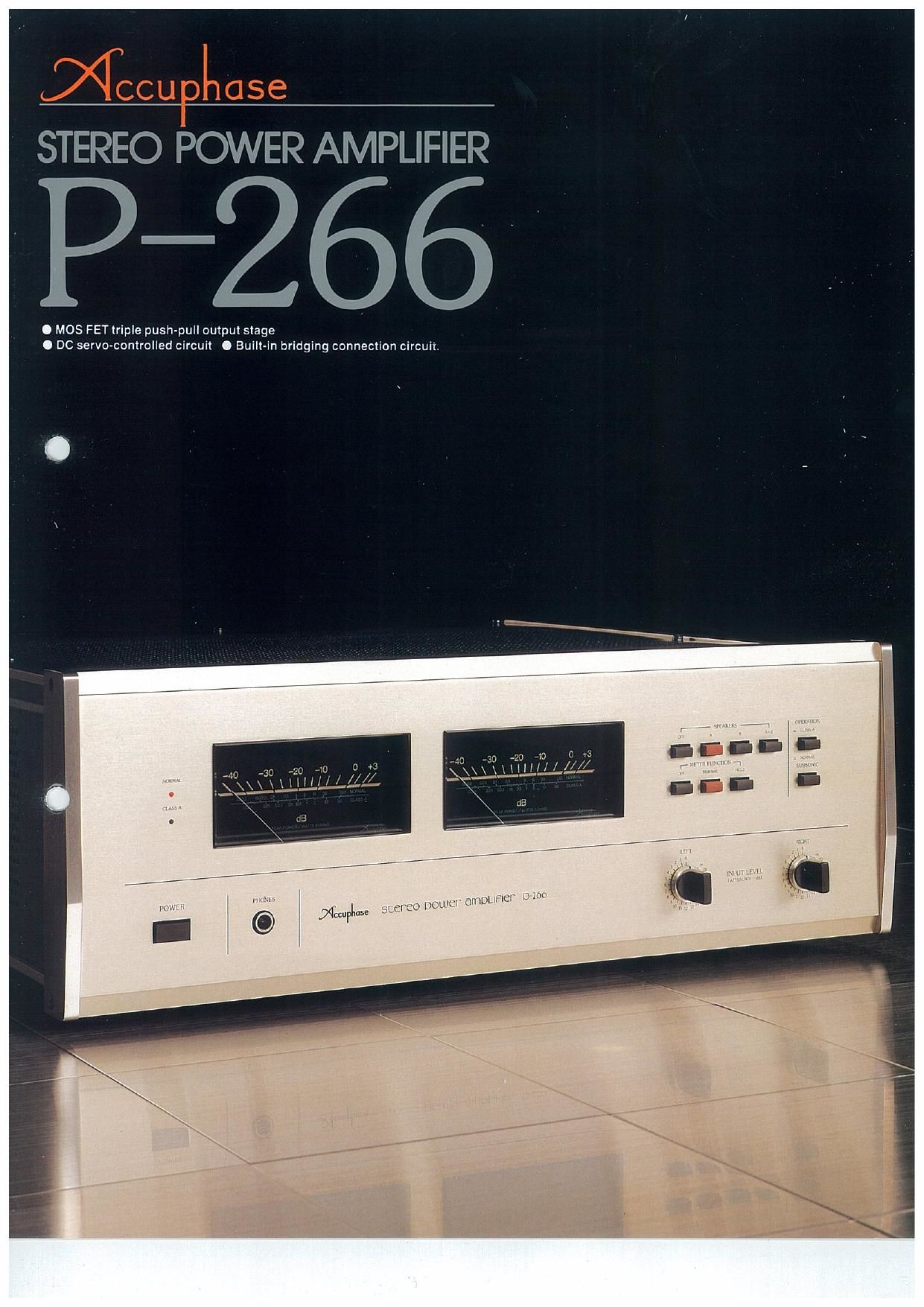 Employing the most ideal power amplifica—
tion MOS FET devices in a triple pushepull
output stage. the P-266 is one of the latest
products perfected with Accuphase's long,
standing superior design technology.

Another important feature of the P-266 is
that all its push-pull amplifier stages are
directly coupled. thanks to its excellently
designed DC Servo Control system. Moreov
er. a cascade push-pull pre-driver stage and
M08 FETs in the final output stage endow it
with almost ideal linearity and excellent high
frequency performance.

The elegant. refined sound quality of MOS
FETs and pure Class-A operation also make it
a most suitable power amplifier choice for
multi-arnplification systems which seek the
ultimate in sound quality. Furthermore. its
built-in bridging connection system permits a
greatly increased power output capability for
special requirements. and ranks the P-266
above any comparable power amplifier on the
market.

The power output stage consists of 3
P~channei and 3N channel MOS FETs. or a
total of 6 M08 FET devices used in a triple
push-pull configuration. MOS FETs have
been used in a number of Accuphase power
amplifiers in the past. and have an estab»
lished reputation for thelr elegant sound
quality. Their use in a triple push-pull output,
together with the heavy»duty power supplies
which have a maXImum power dissipation
(PD) of 600 W, enable the P-266 to deliver
sufficiently linear. high-quality signals even
into 2—ohm impedance loads. and gives it an
unparalleled surplus margin over other amA
plifiers in its class. The above Circuit design is
the key to the superiority of the P266. and its
capability to deliver, with ease, 150 W/ch into
speaker impedance loads as low as 2 ohms,

dance speaker loads are involved. Ordinarily.
protection circuits are provided to restrict
such currents by controlling load impedance
levels. which. of course. greatly reduces the
power output capability of such amplifiers.

The use of 4-ohm rated speakers does not
always mean that the load is always 4 ohms.
in practice, the impedance may vary down to
3 ohms or 2 ohms depending on the signal
frequency.

Furthermore. counter-electromotive forces
can cause momentary transient signals that
are likely to lower the impedance still further,

It is to counter such conditions that the
P-266 is designed with its extra builtrin sur»
plus power margin. Thus. when it is used as a
monophonic amplifier with its built-in bridging
circuit. it is able to withstand 4-ohm load
impedances and still drive almost any speak-
er on the market with high stability.

frequency characteristics that are almost
comparable to that of Class-A operation,
However. the P266 offers pure Classt op—
eration with front panel switching. The opera
ational slopes of the push—puii amplifier de-
vices will then overlap each other to produce
pure ClassrA operation.

Some advantages of Class-A operation
are as follows: almost constant current flows
from the power supply to the output devices
regardless of variations in signal amplitudes;
amplifier interior rapidly reaches stable oper-
ating temperature. This eliminates excessive
heating of devices. and provides highest
signal stability. Better power regulation also
means less transient distortion, Furthermore.
the pertect overlapping of the push—pull out,
put devices operational slopes creates an
even purer Class-A operation for the P-266
than in ordinary Class-A operational am-
plifiers,

Figure 1 shows how Class-A operation ' '*
achieved with the bias switching circuit whic
incorporates an optovcoupler, Normal and
Class-A operation is switched by flashing the
LED in the bias switching circuit to vary the
bias current. This selection is performed by
pushing the operation switch on the front
paneI.The selected mode is indicated by the
LED to the left of the multi-tunction meter.

Fig. 2 Principle of the Bridging Connection

The above data shows the spectrums of inter-
modulation distortion for the P-266 as measured by
the new IHF measurement method. Amplitudes of a
19kHz and 20kHz input signals are shown at the
right side. Any inten'nodulation created by these two
signals would appear as spectrum peaks at tkHz
intervals. the frequency difference between the two
signals. across the frequency bandwidth. This data
shows them to be hardly noticeable. confirming that
IM distortion is less than —93 dB (0.002256).

Another form of IM distortion would appear at
39kHz. the sum oi the two input signal frequencies
(19+20=39kHz). Such a distortion. even it it existed.
would be inconsequential because it is far beyond
the audible range. In the P-266. this form of M
distortion is also less than 93dB.

The above data shows the spectrum character-
istics of transient lntermodulatlon distortion ior the
P-266 when two mixed input signals, a 3.1BkHz
square wave and a 15kHz sine wave. are used.
Since harmonics ol square waves appear almost
infinitely at odd—number multiples. for example In
this case at 9.54kHz (3rd harmonic) 15.9kHz (5th
han-nonlc). they can create, together with the 15kHz
input sine wave. lntermodulated spectrums at fre-
quencies where input signals are absent For exam-
ple. if the third harmonic of the 3.18kHz square wave
(9.54kHz) and the 15kHz Input signal intermodulate,
a speotnrrn can appear at the diiference oi their
frequencies or 5.46kHz (15—9.54=5,46kHz)t
However. the above data shows no spectrum shop
—93dB at that frequency which confirms that TI
distortion ls less than 0.002296.