This is the 4 pages manual for Accuphase M 2000 Brochure.
Read or download the pdf for free. If you want to contribute, please mail your pdfs to info@audioservicemanuals.com. 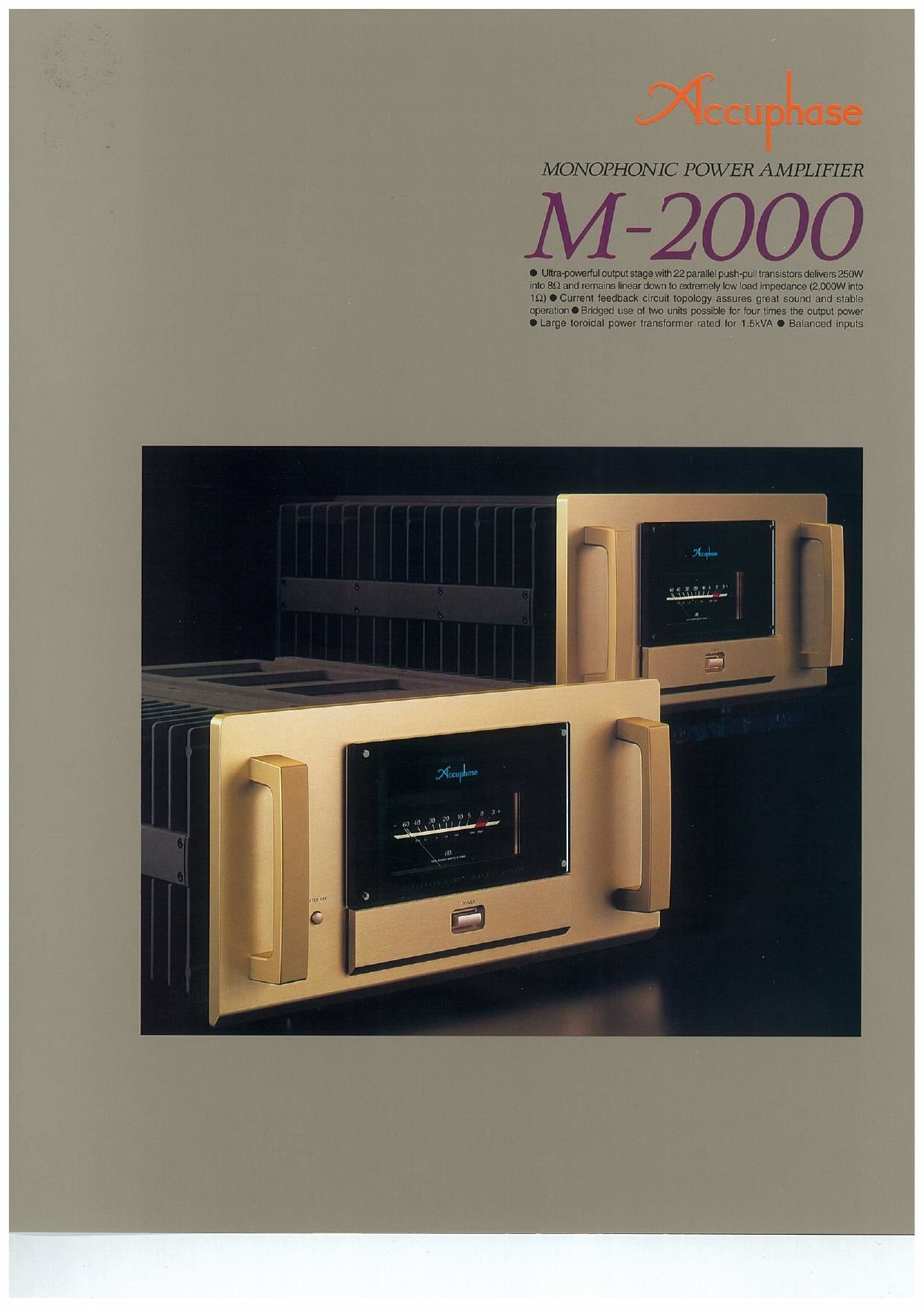 The impedance of a loudspeaker often fluctuates
drastically depending on the music signal that is being
supplied. Sometimes impedance can drop to very low
levels, especially in many high-end models. In order
to tame this extreme fluctuation and showcase the
best sonic characteristics of a speaker, the ampliﬁer
must have very low output impedance (Note 1). and it
must be able to supply a constant drive voltage
(Note 2). When an ampliﬁer is designed to cope with
low load impedances. this also means that it will be
fully able to absorb the counterelectromotive force
generated by the voice coil, thereby preventing the
occurrence of intermodulation distortion

The Accuphase M-2000 was designed to realize the
ideal of constant voltage drive. This no-compromise
approach inevitably resulted in a single-channel mon-
aural unit. A complement of 22 output transistors with
a collector dissipation (PC) of 130W each is used in
the output stage. Connected in parallel. these devices
have a combined collector dissipation of 5,700W At
the extremely low load impedance of in. the amplifier
is rated to deliver 2,000 W (actual measurement
2,370W). The output rating into 2D is 1,000W (actual
measurement 1.570W). and into an 500W (actual
measurement 890W). This progression demonstrates
the amazing linearity of the ampliﬁer which is close
to the absolute ideal. The top»notch level of perfor-
mance is sustained by no-holds—barred constmction,
including a massive Super Ring toroidal transformer
(rated for 1 ,SOOVA. max. 3.000VA) housed in a diecast
enclosure with directly mounted heat sinks. and
serviced by two extra-large filtering capacitors with a
capacity of 40.000pF each. This assures more than
ample reserves and allows the M-2000 to meet even
the most demanding and rapidly ﬂuctuating power
requirements.

The massive aluminum diecast heat sinks at the right
and left of the amplifier achieve highly efficient dis-
sipation of thermal energy. Together with the front
panel. chassis, and rear panel, they form an extre-
mely strong and sturdy entity A large analog power
meter located in the center of the front panel provides
useful information. and the faceplate in traditional
Accuphase brushed gold aluminum blends favorably
with the decor of any listening room. Besides being a
joy to behold. the M-2000 of course sounds abso-
lutely stunning. It handles the entire dynamic spectrum
from fortissimo to pianissimo with ease and authority.
letting the music emerge as never heard before.

ﬁ—
(Note 1) The reasoning for low ampliﬁer output
impedance:
The load of a power ampliﬁer is the loudspeaker
which generates a oounterelectromotive force that
can flow back into the ampliﬁer via the NF loop.
The signal fed back in this way is influenced by
fluctuations in speaker impedance. and interferes
with the drive performance of the amplifier. The
output impedance of a power ampliﬁer should the-
refore be made as low as possible by using output
devices with high current capability.

(Note 2) The constant drive voltage principle:
Even in the presence of a load with wildly ﬂuctua-
ting impedance. the ideal power ampliﬁer should
deliver a constant voltage signal to the load. When
the supplied voltage remains constant for any im-
pedance. the output power will be inversely pro
portional to the impedance of the load. A con-
ventional ampliﬁer can be easily made to operate
in this way down to a load impedance of about 49.
In the region from 3 to m . an increase in thermal
energy becomes a problem and can lead to the
destmction of the output transistors. At to. eight
times the output of an 8-!) load is called for, which
can only be sustained by an extremely well
designed and capable output stage and a highly
robust and powerful power supply section. To build
such an amplifier is a task that requires not only
considerable experience and resources but also a
thorough reevaluation of basic principles.

lector dissipation
(Pc) of 130W and
a collector current
of 15A each. The-
se devices are ex-
cellent in every re-
gard, including frequency response. current amplifi-

drive of any low-impedance loudspeaker load. A massive toroidal power
transformer with a maximum capacity of 3kVA and 22 parallel push-pull
transistors deliver high power with linear progression over an extremely
wide impedance range. The amplifier is rated from 250W into 89 to a full
2,000W into IQ. Current feedback circuit topology assures great sound
and operation stability.

cation linearity, and switching characteristics.
Because the 22 devices are connected in a parallel
push»pu|l configuration. the output stage has
extremely low impedance. Since the devrces are
directly mounted to the extra-large aluminum diecast
heat sinks. heat produced during operation is dis»
sipated with high efficiency. As a result oi this no-
compromise design with a high performance margin.
the power amplifier is capable of delivering enormous
output power in a
linear progression go
towards lower
load impedances.
It also is able to “
drive reactive
loads with ease.
Figure 1 shows
the output stage
of the M-2000.
Figure2 is a graph
plotting the output
voltage versus
current cha-
racteristics.
based on actual n
measurements ”9'2
for various load Londlmpodnnca v:,ourputpuwar
impedances.Thanks to the extremely low impedance
of the output stage. the output voltage remains
approximately constant also when the load chan-
ges, and only the current increases. as is clearly
evident from the chart.This demonstrates the advan-
ced performance of the constant voltage drive.

technique in conventional amplification circuits.
routing part of the output signal voltage back to
the input. In the M-2000, the signal current rat-
herthan the voltage is used for feedback. Figure
3 shows the operating principle of this circuit.
At the sensing point of the feedback loop. the
impedance is kept low and current detection is
performed. An impedance-converting amplifier
then converts the current into a voltage to be
used as the feedback signal. Since the
impedance at the current feedback point (curr-
ent adder in Figure 3) is very low, there is almost

so...” no phase shitt. Phase compensation can be