This is the 4 pages manual for Accuphase F 15 Brochure.
Read or download the pdf for free. If you want to contribute, please mail your pdfs to info@audioservicemanuals.com. 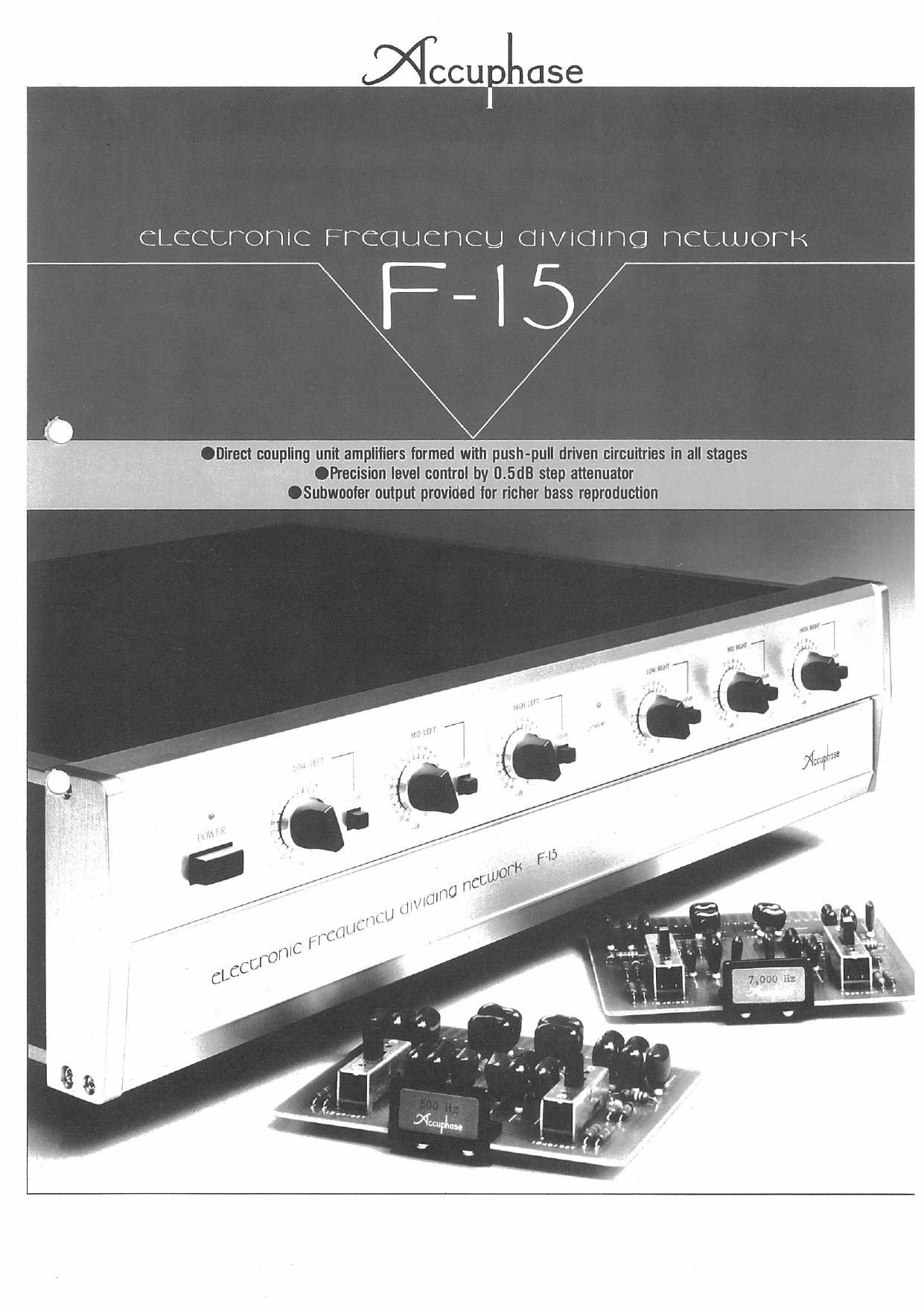 An audio system which uses electronic
circuits to create crossover frequencies and
form separate audio passbands. which are then
amplified and reproduced by their own exclusive
amplifiers and speakers. is called a -œMufti
Amplification System". It becomes a large scale
system for stereo reproduction since one ampli
fier is required for each divided passband. both
for the left and right channels.

However, the system eliminates the shortÂ»
comings of conventional LC crossover net-
works by ensuring maximum 100% speaker
performance. This and other advantages are
gaining increasing recognition, and the system
is now being widely used in higher grade audio
systems to obtain further improvement in audio
sound reproduction.

The difference in the sound quality capa-
bility of a multiÂ«amplification system becomes
increasingly clear when higher quality program
sources are used. Improvements beyond imagi~
nation in the depth, presence. transparency
and reverberation sound characteristics are
now possible from highest quality program
sources with multichannel amplification.

The electronic frequency dividing network
which creates the audio passbands forms the
-œheart" of a multi~ampllfication system. It is.
therefore, no exaggeration to say that its quality
largely determines the quality of the overall
multiamp stereo system.

The crossover frequencies can be chang-
ed readily by using different plug-in type Cross-
over Frequency Boards. These boards which
are available for various frequencies can be
used in both the Accuphase F-tS and F6 Fre-
quency Dividing Networks.

The sound quality of speaker systems has
been improving steadily in recent years, and
also noticeable is the growing tendency toward
bigger and more powerful speakers, In this
respect, we firmly believe that the F45 can play
a vital role in setting up a very effective multi-˜
amplification system in which these recently
improved, large size horn type speakers are
fully utilized.

An electronic frequency dividing network
is made up of a combination of active filter
amps and buffer amplifiers. Figure 1 shows the
block diagram of the F715. All unit amps are
identical at Gain ""1 Amplifiers (2) to (5) are
Active Filter Amps which form the crossover
frequency characteristics in combination with
their associated CR elements.

preceding circuits. Output impedances are very
low in all cases, and the signals of each pass-
band are led to the power amplifier at the very
low impedance of 100 ohms.

The sound quality performance of an
electronic frequency dividing network depends
on the quality of its unit amplifiers and CR ele-
ments which, together. determine its filter
characteristics. The sound improvement poten-
tial of a multi-amplification system cannot be
realized without the closest attention to quality
of those devices.

All the active devices used were most dis~
criminately selected and local feedback was
employed instead of loop feedback to obtain
the utmost limits of performance. 03 and 04
function to supply the constant. regulated
current necessary to prevent distortion from
large amplitude signals. In addition, low distor-
tion over a wide passband is achieved by con
necting the drains of Qt and 02 to the emitter
of 06 and 05 to prevent Miller Effects.

Figure 3 shows the frequency response
characteristics of the F-ts-˜s unit amplifiers and
their wide range which extends to 7MHz (at
-3dB). Another outstanding feature of these
unit amplifiers is their low distortion which has
been held to less than the measurable limit of
0.001 "/n as shown in Figure 4.

Even without taking special measures.
there was very little likelihood of DC drift in the
F-˜15-˜s unit amplifiers because of their high
stability and Gain "t" function. However. DC
Servo Control was added to make absolutely
certain that there would be no DC drift which is
imperative for high quality sound.

For example, even the slightest DC d
a stage before the attenuator can cause noise
during attenuator adjustment. Also even a very
slight DC drift at the output of a frequency
divider can cause poor sound due to unde-
sirable DC drift in the output of the power
amplifier.

DC Servo Control employed for unit ampliÂ»
tiers Nos. 6~1t eliminates all such DC drift
possibilities. Figure 5 shows the circuit used.
it is based on the circuit of Figure 2, with the