This is the 4 pages manual for Accuphase E 306 V Brochure.
Read or download the pdf for free. If you want to contribute, please mail your pdfs to info@audioservicemanuals.com. 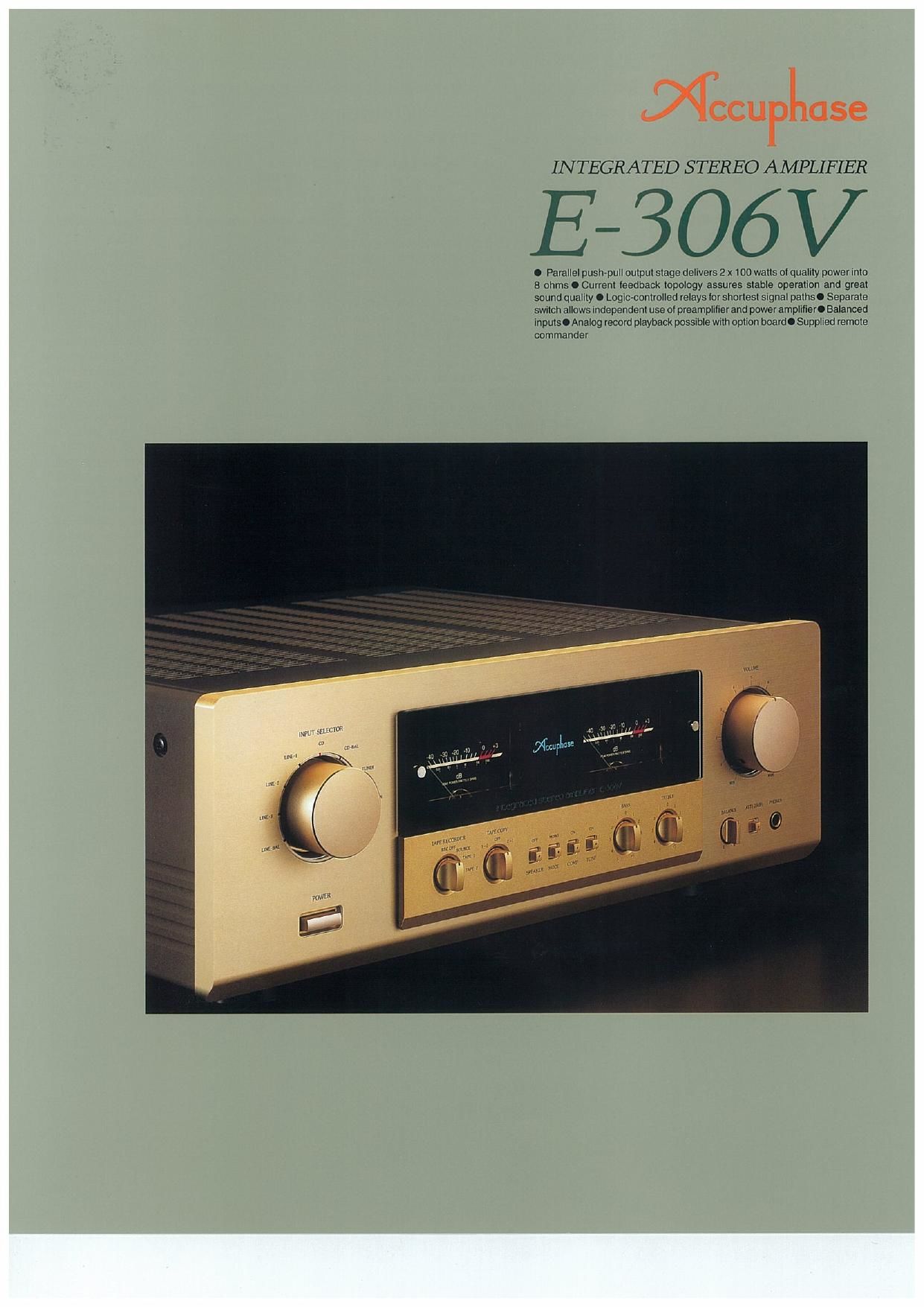 Based on the highly successful Accuphase
integrated amplifier E-306. the model E-SOGV is a
further refined and enhanced instrument for totally
faithful music reproduction, It reflects the extensive
experience Accuphase has gained in building superb
separate-type amplifiers. Every single aspect has
been honed to deliver optimum performance.

An integrated amplifier provides various advantages
such as convenient operation and modest space
requirements. However, because its overall gain is
very high. even the slightest interference or crosstalk
at the input can have a considerable effect on the
sonic result. To preclude any possibility of this. the
E-306V is designed to achieve total electrical and
structural separation of the preamplifier and power
amplifier sections.These two parts operate as if they
were entirely separate components. Each has its own
power supply and dedicated regulator circuitry. A
switch even allows using the preamplifierand power
amplifier independently.

Accuphase-Ös highly acclaimed current feedback
topology is used in both the preamplifier and power
amplifier.This innovative principle eliminates phase
shifts in the upper frequency range and assures
stable operation and uniform frequency response
which does not change with gain. Phase
compensation can be kept at a minimum. and high
amounts of negative feedback with their associated
disadvantages are no longer required, resulting in
excellent transient response, with superb sonic
transparency and detail.

The power amplifier output stage employs a parallel
push-pull configuration. using power transistors
designed for high-current audio applications. Drive
capability especially with critical low-impedance
loads has been dramatically improved. The
preamplifier section is designed around a current
feedback line amplifier with 20 dB gaint It is driven
by a dedicated toroidal power transformer which
eliminates any possibility of interference from the
power amplifier.

enhanced by an option board slot on the rear of the
amplifier which accepts for example an analog disc
input board for MM or MC cartridges. allowing
reproduction of analog records with outstanding
sonic quality.

The tape enthusiast will welcome connectors for two
tape recorders, with easy dubbing in both directions.
Tone controls. loudness compensation. and a
supplied remote commanderare further advantages.
The newly designed front panel is dominated by the
input selector and volume control knob on both sides.
with large power meters arranged in the center. its
sophisticated design makes the E-SOGV a pleasure
to look at as well as a delight to listen to.

Figure 1 shows a circuit diagram of the power
amplification stage. The power transistors are
designed for audio applications and have been
selected for optimum
frequency response.
forward-current transfer
ratio linearity. and
switching performance
characteristics The
devices are connected in
parallel and mounted
directly on a large heat
sink for efficient
dissipation of thermal energy This allows the E-306V
to deliver ample power output. amounting to 140 watts
into 4 ohms. 120 watts into 6 ohms. or 100 watts into
8 ohms per channel,

When the gain of an amplifying circuit increases.
frequency response. i.e. the bandwidth that can be
handled by the amplifier. becomes more narrow To
counter this effect. a commonly employed technique

called negative feedback (NFB) routes part of the
output signal back to the input. Conventional
amplifiers employ voltage NFB. whereby the output
voltage is used for the feedback loop, in the E-306V
however, the signal current rather than the voltage
is used for feedback. Figure 2 shows the operating
principle of this circuit. At the sensing point of the
feedback loop. the impedance is kept low and current
detection is performed. An impedance-converting
amplifier then converts the current into a voltage to
be used as the feedback signal Since the impedance
at the current feedback point (current adder in Figure
2) is very low. there is almost no phase shift. Phase
compensation can be kept to a minimum. resulting
in excellent transient response and superb sonic
transparency, [-~-
Figure 3 showsi
frequency respon-
se for different
gain settings of the
current feedback
amplifier. The
9 r a p h s
demonstrate that
response remains
uniform over a wide range,