This is the 8 pages manual for Accuphase DP 80 Brochure.
Read or download the pdf for free. If you want to contribute, please mail your pdfs to info@audioservicemanuals.com. 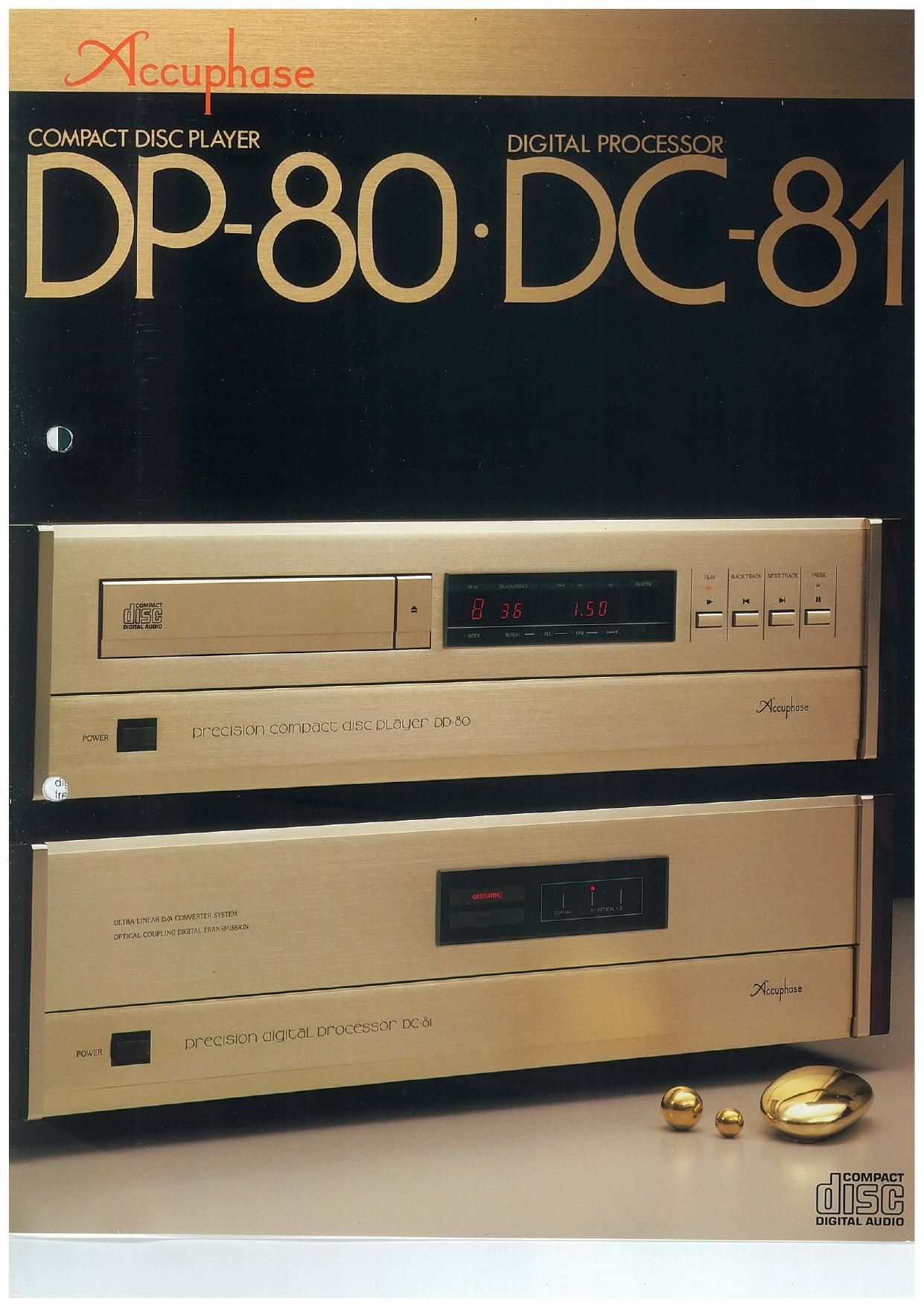 That the sound quality recorded at the studio or concert hall is
reproduced true to life in the confines of the home is the one
major attraction of digital audio. Its standard-bearer is the
Compact Disc which is responsible for the ongoing big change
in the audio world.

We at Accuphase predicted the coming of the digital audio day
years ago and embarked on the development of CD players.
The DP-BO CD player and the DC-St digital processor are the
first fruits of our relentless efforts, We are confident that the CD
player system consisting of this player and digital processor
combination is on the threshold of the highest available quality.

In the analog disc world, components such as tape recorders. cartridges.
tone arms. and shells have their own effects that modify the original sound,
Moreover. they closely interact With one another. resulting in a reproduced
sound peculiarto that system. In the digital recording/reproduction world. the
tendency is to eliminate modification of sound by components and the degree
of freedom is narrower from the viewpoint of creating unique sound. However.
because of virtually no sound modification. reproduction of actual sound held is
unlimitedly possible. And this is the big attraction of digital recording/ reproduc-
tion. You may consider this feature of digital audio systems to be rigid and
inflexible if you are one of those who enjoy the "tinted" sounds of analog
systems. However. the digital systems' greatest advantage lies in the fidelity to
the actual sounds
What is required from a digital audio system is therefore to reproduce the
beauty of the program source With the utmost accuracy and faithfulness.
preventing the quality of the actual sound field from being degraded.

As mentioned. the biggest advantage of analog audio systems is that the
sounds they process are open to slight modification. However. in a digital
system in which the signals are encoded and processed. such modification of
the actual sounds hardly takes place, A defective digital system may cause
dropout or distortion of sounds. ln developing a digital system. therefore, the
utmost emphasis must be placed on how to prevent such dropout and
distortion of the actual sounds and to improve the system-˜s performance up to
the theoretical upper limit. This should be the basic policy of manufacturers of
digital audio systems. Without adhering to this policy. manufacturers should
never attempt anything that may result in modification of the actual sounds nor
attempt to compensate for the dropped out or distorted sounds by means of
sound modification technique.

With this philosophy in mind. Accuphase has developed a CD player in which
theoretical upper-limit performance is achieved.

This system conSists of the DPÂ»80 CD player. which reads digital signals from
compact discs. and the DC-Bt digital processor. which converts the digital
signals the DP-BO reads into audio signals.

Fig 5 shows the block diagram of the DPVBO CD player, The DPVBO outputs
digital signals only and therefore. is used with a processor
The output digital signals are transmitted by the Accuphase's original optical
fiber transmission system. which completely blocks spurious radiation. and
thus excellent sound quality is assured, Moreover, the DP-BO is equipped with a
coaxial cable output of standard format. Therefore. not only the D081, a
processor exclusively developed for the DP-Bo. but also digital processors of
other make can be connected to the CD player. The laser pickup is driven by a
linear motor and controlled by an exclusively developed 8Â»bit microprocessor.
Therefore. an access time of less than one second has been achieved.
As the reference clock signal that controls the operation of the player and the
timing of the digital signals. the single-master-clock system is employed.
Consequently. a beat which degrades the sound quality is seldom generated.
Heavy and rigid construction of the housing is highly resistant to vibrations
caused by the disc revolution and eliminates the adverse effect on the sound
quality by the sound pressure from the speakers. In addition, the complete
shielding and the line filter prevent spurious radiation from the radio-frequency
horse components,
Weight is placed on the simplicity of operation, Only four keys appear on the
front panel. Othercontrol keys are hidden in the subpanel at the lower part of the
front panel. Therefore. you can operate the DP-BO CD player as if you are
operating a conventional analog disc player. The DP-BO can be fully remoteÂ»
controlled by the Hot remote commander attached as an accessory.

The most unique feature of this CD player system is the DC-Bt digital
processor. Fig 6 shows the block diagram of this processor. In addition to the
standard 75-ohm coaxial cable terminal. two optical fiber receptacles. which
prevent the spurious radiation. are prowded for receiving the signals sent from
the DP-BO CD player. The 75-ohm coaxial cable terminal allows the digital
processor to be connected to CD players of other manufacturers.

The D/A converter which converts digital codes into analog signals is the heart
of the digital processor depending on which the reproduced sound quality
varies. For the first time in the world. Accuphase has employed a D/A converter
configured of discrete elements which attains the theoretical zenith of the digital
signal processor. Additionally, each discrete element is carefully adjusted so
that the zero-cross distortion does not occur even when signals with a small
magnitude are to be processed.

The 16~bit digital signal are input to each of the right and left channels of the D/A
converter through 17 optoisolators so that the analog circuitry is completely
electrically isolated from the digital Circuitry by these 34 optoisolatois. As a
result. the interference between the digital circuit and analog circuit are
eliminated. preventing the degradation of the sound quality. Moreover. an
independent transformer is employed exclusively for the digital circuitry and
the digital and analog circuits are shielded to prevent mutual interference.
To eliminate the unwanted components outside the audio frequency range. the
double over sampling frequency method is adopted with the 121Â»stage digital
filter which offers the best available performance. As a result. amaztng charac-
teristics such as an attenuation of -90dB at 24.7kHz and a ripple of :0 001 dB
within the band have been achieved. The phase difference at high frequencies
between the left and right channels is eliminated by an independent digital filter
provided for both the channels.