This is the 4 pages manual for Accuphase DP 55 Brochure.
Read or download the pdf for free. If you want to contribute, please mail your pdfs to info@audioservicemanuals.com. 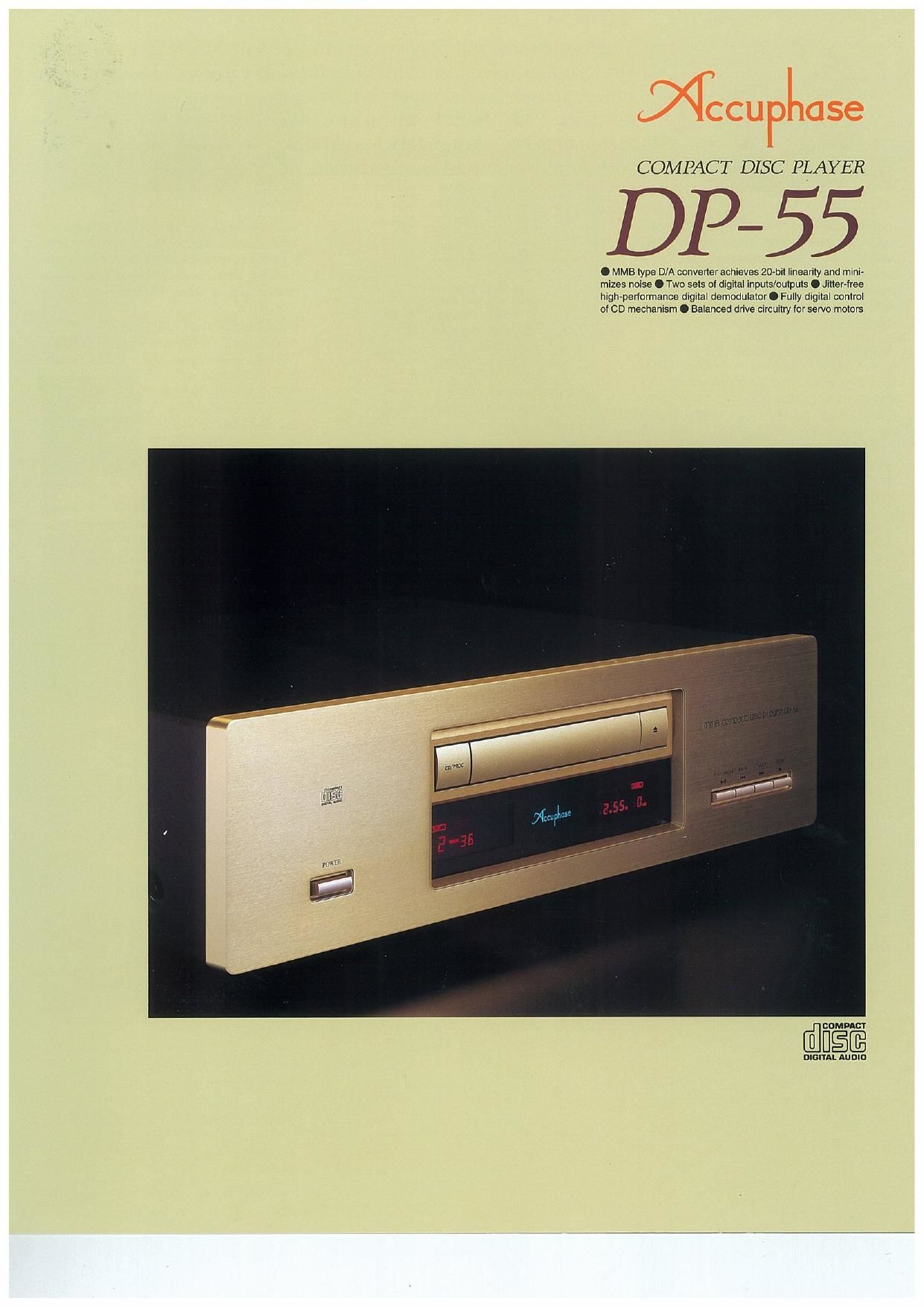 The DP-55 represents another breakthrough in the
evolution of the integrated-type CD player. While
incorporating a wealth of sophisticated Accuphase
technology originally developed for top-of-the—line
separate-type CD players, the DP-55 is an ama<
zingly affordable single-enclosure model that can
also serve as a digital processor.

The CD transport section uses fully digital circuitry
forcontrol of all actuators and mechanical functions,
This allows optimization of servo parameters for
each individual disc as it is being played, resulting
in stable operation and a drastic reduction of read-
out errors. The laser pickup is an ultra-compact type
with integrated FiF amplifier. and all actuators are
driven by balanced circuits which do not conduct
any current to the ground line. A tray lock feature
firmly secures the tray during playback. and the
entire CD mechanism is mounted on a metal chas-
sis of high rigidity, designed to minimize any vibra-
tions that may arise during playback. In this way,
the DP-55 covers every electrical as well as me-
chanical aspect to assure highly precise readout of
the digital signal. A digital level control and balanced
output circuitry are further advantages for optimum
sound.

As can be seen from the illustration, the high-speed
output of an 8-times oversampling digital filter is
connected in parallel to the individual converters.
immediately after D/A conversion, the output of the
converters is combined while still in high»speed
form. Thus, rather than simply linking the converter

elements in parallel, the MMB circuit drives each
converter separately, so that it can develop its full
potential. Special attention was paid to phase res-
ponse at high frequencies. Parts selection, layout
and wiring patterns were optimized to achieve per-
fect phase matching. The end result is performance

THD (+nolse) vs. frequency response
(improvement with changed number of DAG: in pass)

which sets new standards regarding linearity and
absence of distortion and noise.

An important characteristic of the MMB principle is
the fact that it improves performance regardless of
signal level and frequency. The converter therefore

localization of sound sources and a heightened
sense of space and ambience. As illustrated by the
performance chart. linearity of digital input vs ana-
log output is maintained from the highest signal level
down to levels as low as -110 dB.

To allow use of the DP-55 as a high-quality digital
processor. aset of digital inputs is provided for com-
ponents that can supply a
digital signal, such as another
CD transport unit, DAT
recorder. MiniDisc recorder
etc. For utmost flexibility, the
input can handle both optical
and coaxial connections.
Since internal processing of
audio data is carried out entirely in 24—bit format,
upgrading for future standards is also possible.

The DP-55 provides a coaxial and an optical out-
put connector which let the
user supply the signal in digi-
tal form to a digital recorder
such as a DAT, MD. or CD-Fi
unit, The outputs carry not
only the signal from the CD,
but also the signal from com-
ponents connected to the
digital input, allowing direct digital recording with
unprecedented flexibility.

Demodulation of the digital signal is carried out by
a CSB412 chip (made by Crystal Semiconductor).
This device not only has extremely low inherent
jitter, it also is capable of absorbing any jitter com-
ponents contained in the input signal. Since the chip

can handle digital signals up to a width of 24 bits,
the advantages of the MMB principle can be rea-
lized with any type of program source.

The purpose of a digital filter is to multiply the samp-
ling frequency by an integer. thereby moving any
spurious noise components far outside the audible
range,