This is the 6 pages manual for Accuphase C 260 Brochure.
Read or download the pdf for free. If you want to contribute, please mail your pdfs to info@audioservicemanuals.com. 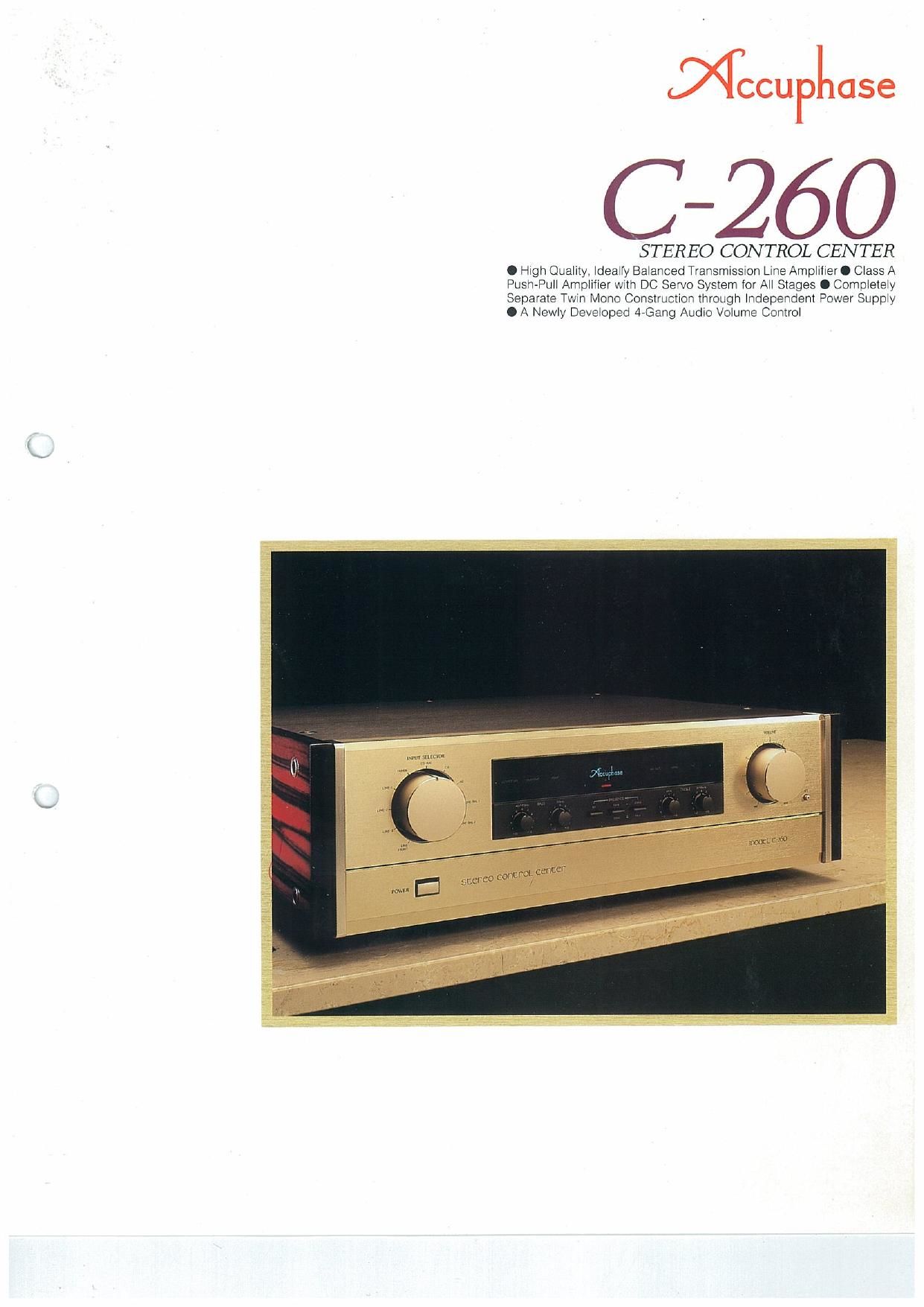 A preamplifier or a -£Control Center". as we call it
here. is positioned between the power amplifier and
such musical sources as a CD player. analog turnte
able. tuner. DAT recorder. etc. conveniently con-
trolling the signal traffic and adjusting the signal
volume to any desired level This is the main func-
tion required of a preamplifier. However. rt must
also provide absolutely uncolored sound reproduc-
tion whereby the listener Will not even notice its
existence.

Employed by the very first model of the C-200
series preamplifiers is a pure complementary push-
pull amplifier circuit. a truly ideal amplification cir~
cult topology, As the series advanced. such addi-
tional circuit features as a direct coupled and cas-
code bootstrap Circuit were added. Further. a balv
anced signal transmission circuit was very quickly
employed for both the input and output stages. in
order to further improve the audio quality.

In the 0-260. the circuit perfection has been
furthered by successfully developing an output cir-
cuit consisting of a single amplifier and no trans-
former. This is an ideally balanced signal transmis-
sion circuit. whrch does not require a common
ground.

Accuphase-śs original logic relay control circuit
has been employed to control complex audro signal
traffic. The relays used are in a sealed casing. thus
not exposing the electric contacts to air. which
guarantees many years of perfect operation and
high quality sound reproduction.

Special attention has been paid to the audio
volume control. which normally tends to be a big

The unparalleled performance of the new Accuphase C-260
Stereo Control Center sets a new standard for the times.

circuits with exclusive power supplies that control line
ampli’¼üers for a balanced transmission system. And the
complete twin mono construction incorporates independent
power transformers. The versatility of the innovative C-260
makes it a unique and powerful stereo control center.

source of sound deterioration. The resistor element
of the control is polished very precisely to reach a
mirror-like smoothness, This newly employed vol-
ume control rotates the resistor elements unlike the
conventional volume control. in which the collectors
rotate. Thus. it successfully reduces the number of
metal joints. which have been a source of sound
deterioration. resulting in a remarkable improve-
ment of the distortion characteristics.

The 0-260 provides a numberof functions worthy
to its designation as a "Control Center". All func-
tions, other than those most commonly used. are
logically organized under the hinged front sub-
panel, This assures the utmost ease of operation
while maintaining a Simple overall appearance,

We are confident that the 0260 incorporates all
the technical know-how that Accuphase has
accumulated since its foundation, It combines
superb performance characteristics. excellent op-
erational functions and beautiful design. all of which
have been retined to their utmost. bringing you a
step higher in the lascination of sound reproduc-
tion.

Fig. 1 is a circuit block diagram of the 0-260. The
simplified functional explanation of the balanced
line amplifier stage is shown in Fig. 2 As shown.
AMP2 and AMPS complement each other's opera┬╗
tion. Asa result. nocommon ground (G) exists in the
circuit. thus forming an ideal amplifier circurt. when

operated in the balanced signal transmissron con┬╗
nection as shown in Fig. (a) Even when unbal-
anced external equipment is connected to the in-
puts. outputs or both. the new balanced line am,
plifier circuit of the 0260 simply grounds the nega-
tive signals. while maintaining its original circuit
configuration functioning fully as an ideal balanced
transmission system. In other words. the circuit.
through which signals pass, remains the same
whether or not it is used With balanced or unbal-
anced connections. thus successfully eliminating
any changes in the signal path that may deteriorate
sound quality. . 3
This ideally balanced circuit based on the sigt

Fig. 3 shows a circuit diagram for the balanced
input amplifier. it is based on Accuphase-śs original
differential complementary push-pull input am-
plifier and cascode push-pull amplifiercrrcuits. The
input stage. in which a high-gm type PET is employ-
ed. consists of a constant current load type cas-
code circuit. The 0-260 operates as a balanced
input amplifier, when the input signals are con-
nected to the positive (+) and negative (-) termi-
nals. It operates as an unbalanced amplifier. when
the input signals are connected to the common
ground and positive terminals Naturally. these am-

(b) When connected to unbalanced input or output equipment