This is the 4 pages manual for Accuphase A 50 V Brochure.
Read or download the pdf for free. If you want to contribute, please mail your pdfs to info@audioservicemanuals.com. 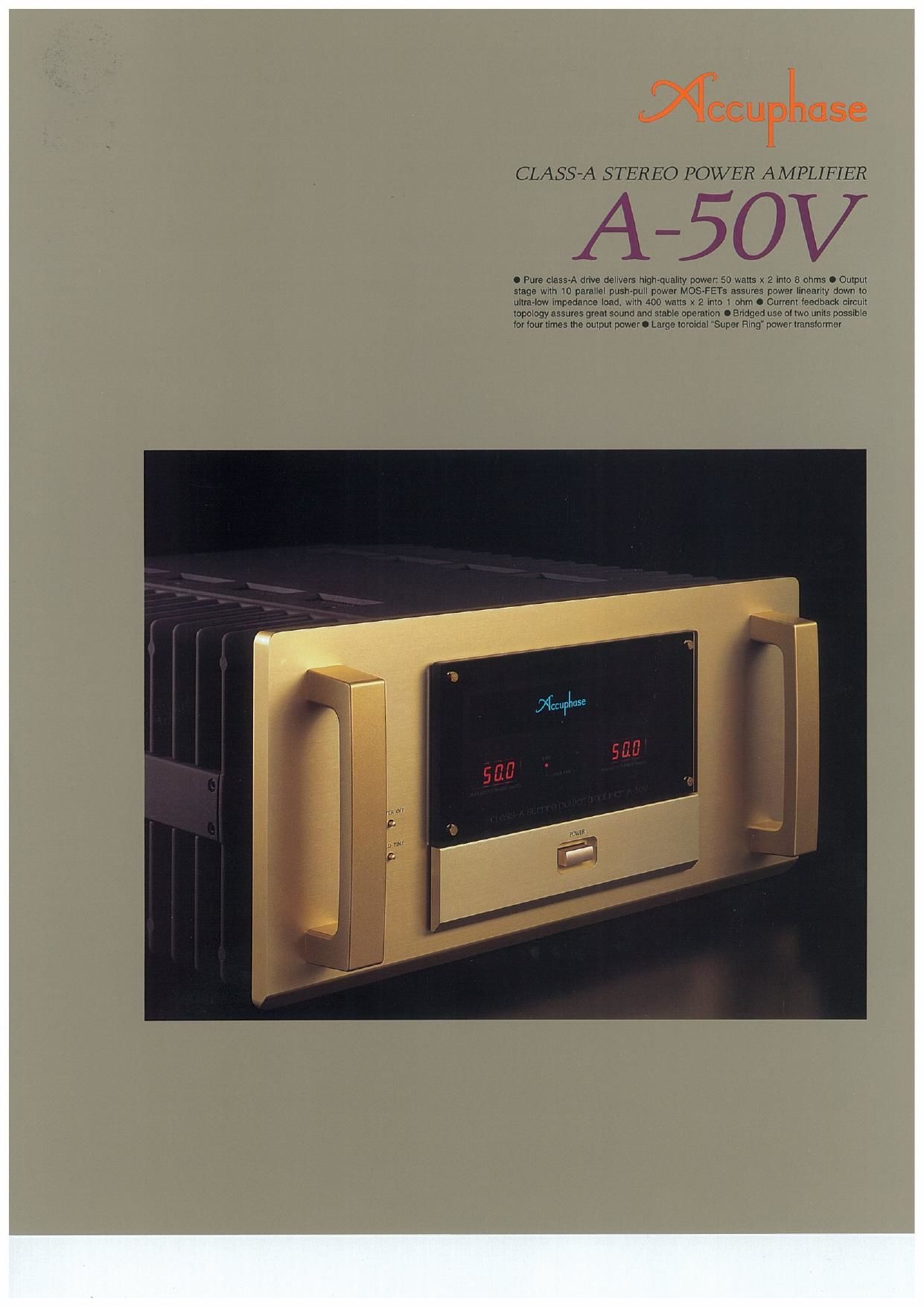 The A-50V is a stereo power amplifier based
on the same design technology as the M2000.
It uses MOS-FET devices selected for their
musical qualities which are driven in a
no┬╗holds-barred class-A circuit configuration.
The amplifier brings out even the most delicate
nuances in the source with full authorityThis is
Accuphase sound at its very best.

Pure class-A operation means that the circuit
always draws the same amount of power from
the power supply, regardless of the presence
or absence of a music signal. It is impervious
against external influences and has high sta-
bility. The output stage produces considerable
amounts of thermal energy, but in the A-SOV
this is dissipated by extravlarge heat sinks for
the left and right channels, to prevent the pos-
sibility of problems caused by internal heat
buildup.

Note 1: The reas
impedance
The load of a power amplifier, namely the loud-
speaker, generates a oounter-electromotive force
that can flow back into the amplifier via the NF loop.
This phenomenon is influenced by fluctuations in
speaker impedance, and interferes with the drive
performance of the ampli’¼üer.The output impedance
of a power amplifier should therefore be made as
low as possible by using output devices with high
current capability. This absorbs the counter-elec-
tromotive force generated by the voice coil and me
vents the occurrence of intermodulation distortion.

Even in the presence of a load with wildly fluctuat-
ing impedance, the ideal power amplifier should
deliver a constant voltage signal to the load. When
the supplied voltage remains constant for any im-
pedance, output power will be inversely proportional
to the impedance of the load. A conventional am-
plifier can be easily made to operate in this way
down to a load impedance of about 4 ohms. At 1
ohm. however, eight times the output of an 8-ohm
load is called for, which can only be sustained by
an extremely well designed and capable output
stage and a highly robust and powerful power sup-
ply section.To build such an amplifier is ataskthat
requires not only considerable experience and re-
sources but also a thorough rethinking of basic prin-

The output stage (Figure 1) uses power
MOS-FETs with negative thermal characteris-
tics. 10 pairs of these devices are arranged in a

parallel push-pull configuration for each chan-
nel. The result is stable operation with ideal
power linearity even at ultra-low impedance load.
The maximum power dissipation of one
MOS-FET is 120 watts, but the actual power
load per pair is only 5 watts, so that each de-
vice is driven only in its low-power range where
linearity is excellent. The drive stage also uses
power MOS-FETs, in a cascade connection that
gives wide fre- z,

quency re-
sponse and re-
quires only 20

rent feedback principle for negative feedback.
At the input point of the feedback loop, the im-
pedance is kept low and current

detection is performed. A
trans~impedance amplifier then con-
verts the current into a voltage to

be used as the feedback signal.
Since the impedance at the current
feedback point (current adder in Fig-
ure 3) is very low, there is almost no

phase shift. Phase compensation
therefore can be kept at a minimum.

0 A minimal amount of NFB results in
ourwr